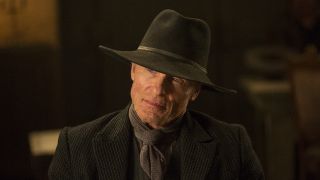 Westworld is based on a 1973 film of the same name and starring Yul Brynner, juuust in case you didn't know. There's been one very obvious Easter egg a lot of fans have been waiting for that, finally, dropped on the TV show in the latest episode.

It's mildly spoilery so I'll put it after the GIF...

Right, spoilers ho! In episode 6 Benard needs to check out some old tech for... reasons, and heads down to the park's B82 floor. There he finds old 70s styled offices and passes - ta-da! - what looks like Yul Brynner's Gunslinger stood in the corner.

And here's a comparison shot, just to be sure.

In the original movie the Gunslinger was one of the key malfunctioning robots who pursued one of the guests, Terminator style, across the desert. He was also called the Man In Black, the role currently played by Ed Harris in the TV show. So far Harris appears human, but that connection has fueled plenty of rumours about who or what he might actually be.