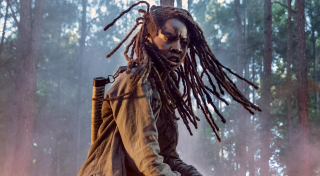 Danai Gurira has confirmed that The Walking Dead season 10 will be her last.

"I can confirm that this is the last season I will be on this amazing TV show as Michonne," Gurira said during the show's San Diego Comic-Con panel to an audibly sad reaction from the audience.

"I would just like to say that this has been one of the purest joys of my life to play this role and to be amongst these people and those who are not here right now and amongst all of you," she continued, according to The Hollywood Reporter. "I'm very thankful for the experience I've had in ways I can't state right now. My heart does not leave in any way, shape or form. The TWD family is forever. The connection between us never ends." Following her comments, the audience gave Gurira a standing ovation.

The actress made her first appearance on the show as the fan-favourite character Michonne in season 3. She's the latest major cast member to leave the show, with Andrew Lincoln - who played Rick Grimes - having left midway through season 9.

For more clips from San Diego, be sure to mosey on over to our SDCC 2019 trailers hub, as well as checking in on the San Diego Comic Con 2019 schedule - so you know exactly what to expect in the days ahead.