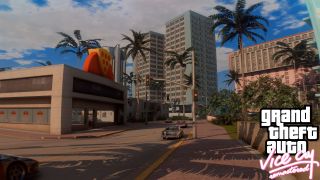 If you've found yourself longing for a sunset drive along the coast in the Grand Theft Auto world, you're in luck, as a new mod for GTA 5 lets you hang out in Vice City again.The nostalgia is real, and it's neon. Check out the trailer for Vice Cry: Remastered below.

Vice Cry: Remastered is a port of Vice Cry, a popular mod for GTA Vice City that overhauled the game's graphics back in 2015. It looks like this is a fresh update, as a version titled '1.0' dropped on December 20, 2019, a month or so after the official trailer launched. Vice Cry: Remastered runs as DLC, with new models and textures, working traffic lights, custom population groups, car generators, better water mechanics, and 3D neon models - amongst other things. The trailer shows off some of the original missions Tommy Vercetti gets himself wrapped up in, but you won't be able to play those in this mod. However, there are new missions dropping with Vice Cry: Remastered that make this mod more than just a fun rebuild of a GTA classic.

Thanks to improved graphics tech, you can step into Vice City in GTA 5 and enjoy fictional Miami in all its humid glory. It certainly looks beautiful, with richly textured palm trees set against brilliant sunsets and water that's practically begging for you to jump in.Download Vice Cry: Remastered and see its beauty for yourself right here.

Speaking of GTA nostalgia, we recently learned that GTA 6 will not feature Carl 'CJ' Johnson, the protagonist of GTA: San Andreas.