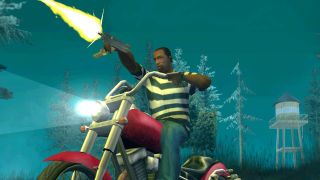 A recent rumour about GTA 6, the potential next instalment in Rockstar's open world crime series, has been debunked by the voice of GTA: San Andreas' main protagonist, Carl 'CJ' Johnson.

The rumour stated that actor and artist Chris Bellard would be returning to reprise his role of CJ for the inevitable sequel to GTA 5, but Bellard took to Instagram to personally clarify that he currently has no involvement with any Rockstar projects whatsoever.

To kill the rumors ! Im not involved in GTA VI at all.. Fucc @Rockstargames period.. CJ will have to be voiced by another MF but not me IDGAF what yall heard.. MayLay

This doesn't, of course, rule out the return of CJ as a character in GTA 6, who could be played by someone else, though Bellard's comments on social media suggests he has no interest in coming back even if Rockstar asked him, as it sounds as though the pair split on bad terms.

Grand Theft Auto isn't the only subject of discussion making noise with the Rockstar rumour mill, either, with reports of both Bully 2 and a new IP codenamed Project Medieval in the works at the acclaimed studio doing the rounds in recent months.

Rockstar itself has said nothing, of course, and is still hard at work rolling out new content for both Red Dead Online and GTA Online, the latter of which has just hit Xbox Game Pass.

Whatever the developer gets up to next, it's sure to be a next-gen exclusive, with both the PS5 and Xbox Project Scarlett slated for a Holiday 2020 release later this year. We'll let you know as soon as we hear anything more official.

For more, check out 11 tech demos to make you excited for next-gen, or watch below for a guide to everything else out this week.