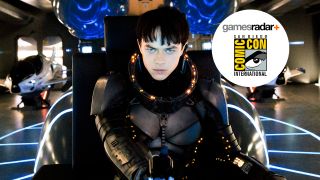 Luc Besson's upcoming sci-fi movie, Valerian and the City of a Thousand Planets, made its footage debut at San Diego Comic Con today. Myself (and everyone else in Hall H) were treated to seven whole minutes of footage starring Dane DeHaan and Cara Delevingne, plus a tonne of concept art.

The comic book adaptation won’t be out for another year, but the French director gave the crowd a good sense of what to expect.

In short: The Fifth Element, to the power of 10.

After telling fans about how he fell in love with the comic as a kid, and binned his script after seeing Avatar because he realised he needed to raise the bar, Besson unveiled the concept art for Valerian. Stunningly beautiful, it showcased not so much a thousand planets as a thousand fantastic beasts: aliens called 'mirrors', aliens with snail-like heads, long-limbed farmer aliens, scuba-gear aliens... lots of aliens basically.

Following that, we were shown five clips plucked from the unfinished film, which I'll describe to you now. Look away if you want to go in cold next summer.

In the first clip, Valerian (Dane DeHaan) dashes down a spaceship corridor in a Pacific Rim-style suit, with Laureline (Cara Delevingne) radioing him instructions to run through a wall. I'll come back to this…

Clip two offered some straight-forward ass-kicking, with Laureline, similarly suited up like Valerian, coolly warning the two goons frogmarching her down a corridor that they ought to cuff her, before laying them out cool. "Good job, boys," she quips, before running into a trio of matching ETs.

The third clip sees some banter between our two leads concerning Laureline’s starship-driving skills, before taking us down to the surface of a desert planet, where they meet a group of heavies – who are as gobsmacked as I was to see that the duo are now dressed like Vegas tourists.

Clip four introduced Ethan Hawke’s character: a eyeliner-ed space cowboy who ushers Valerian into a joint called the Glam Club to see his star performer who turns out to be Rihanna.

The penultimate clip gave us the best sci-fi action sequence involving a bus since Independence Day: Resurgence. A big monster bothers the vehicle at length, shrugging off bullets to rip open the roof. Without giving too much away, there’s jumping, running, and the timely appearance of a spacecraft.

Last but not least, I saw a rapid-fire montage (space battles! Sea monsters! Clive Owen!) that also gave us a pay-off to the first clip: as instructed, Valerian runs through a wall… and then a succession of other dimensions / environments / platform-game levels. Yeah.

Pre-empting obvious comparisons to The Fifth Element, Besson pointed out how much bigger, and digital-er, his new film is. Where the 1997 movie had a mere 200 FX shots, Valerian is aiming for a whooping 2,700! Compensation, Besson suggested, for the "frustration" he experienced two decades ago. "[The Fifth Element] was done the old way, where you lock down your camera and do one shot a day." He said. "I wanted revenge!" It looks like he'll get it.

Directed by Luc Besson and starring Dane DeHaan, Cara Delevingne, Ethan Hawke, and Clive Owen, Valerian and the City of a Thousand Planets opens in the UK and US on July 21, 2017.