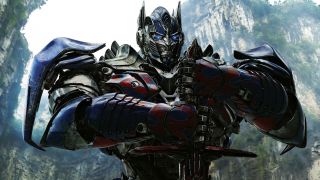 Michael Bay's Transformers 5 is going to be an adventure unlike any of his other blockbusters featuring anthropomorphised robots. Alright, so it won't be totally different. There's still Autobots and Decepticons galore - but the big change stems from its backstory. Rumors say that the film has Optimus Prime returning to Earth to locate an artefact that can help save his home planet of Cybertron.

That artefact is connected to King Arthur via his trusty pal, Merlin. You've got to hand it to Bay, no-one in a million years expected Transformers to forge a narrative link to Arthurian legend, but here we are. It looks as if principal photography has caught up with that part of the story, as BBC News reports that the flick is shooting in the Isle of Skye, Scotland with actors trotting about on horses in chain mail costumes. There's a few snaps taken of actors on set in what appears to be period outfits:

Either these snaps are proof that those crazy rumors are true and the film is dipping into Arthurian legend, or the Beeb took pics of someone's cosplay camping trip. They're a little far away to ascertain exactly what's happening, so hopefully we'll get some shots closer to the action soon.