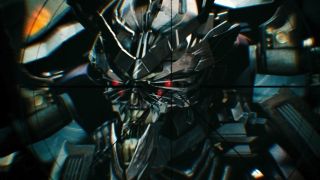 Transformers 5 is slowly stacking up every major 'bot from the franchise to fill out its non-human cast. Iconic baddie Megatron returns to bring more destruction, and Autobot leader Optimus Prime is on hand to clean up the Decepticon messes and fight.... err... three-headed robo-beasts. Following the recent confirmations that Autobots Crosshairs and Drift are joining the flick, it's now the Decepticons turn to bolster the ranks. As revealed on the official Transformers Twitter, we know that Barricade is back:

Barricade's car form was previously teased back in June, but this gives us a bit of insight as to his true Decepticon state. He was last spotted being taken down by NEST in the third movie, Dark of the Moon, so Michael Bay's going to have to cook up some way to orchestrate his return.