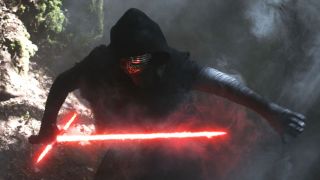 Scars run deep in a galaxy far, far away. Unless you’re Kylo Ren that is. Star Wars: The Last Jedi director Rian Johnson wasn’t a fan of the scars Kylo Ren was given in his climactic tussle with Finn and Rey in Star Wars: The Force Awakens so he changed them to make them look cooler. Obviously.

@origonalname113 @mutlubulutlar @StarWarsNewsNet @TheLastKylo It was my decision to slightly adjust it, and that was my justification. It honestly looked goofy running straight up the bridge of his noseApril 19, 2017

The Star Wars: The Last Jedi trailer shows Kylo Ren with a giant scar over his right eye – which you can see below – (h/t ComicBook.com) and gets rid of the snaking mark that dominates Ren’s face at the end of The Force Awakens.

Will they bother explaining it in The Last Jedi? Probably not. At least it’s not the worst director change to a Star Wars movie *cough* CGI ghost Anakin *cough*.