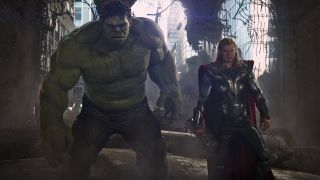 Ever since Mark Ruffalo made his Hulk-smashing MCU debut in 2012's Avengers Assemble, the question of whether the green goliath would ever get another solo film - and whether or not that film would adapt the popular Planet Hulk comic - have persisted. Ruffalo has stated on multiple occasions that the chances of that happening are unlikely, but some new information indicates that we might be getting a Planet Hulk movie after all... in Thor: Ragnarok.

According to JoBlo, Marvel plans to include elements from the comic book storyline in Thor's final outing. Specifically, Hemsworth's hero will find Hulk fighting in gladiatorial games presided over by Jeff Goldblum's Grandmaster. Best of all, he'll be sporting the "one-shoulder armor as seen in the comics, so expect him to be decked out in the familiar Planet Hulk look".

The site also has some interesting details about Thor's new look too, noting that the God of Thunder "will be sporting a shaved head (but not completely bald) for at least a portion of the film". Finally, Tessa Thompson's Valkyrie - who is a blonde-haired warrior in the comics - will be "wearing war paint on her face, much like a Native American warrior".

As for what the main thrust of the story is, "the gist of Thor’s mission in the film is that he needs to find the ultimate weapon to stop Ragnarok and reset the universe". This is the only part of the report I hope isn't true. Too many Marvel movies revolve around searching for a macguffin, and that's a cliche I'd like to see Marvel grow out of a little more as Phase Three continues.

With that said, all the other tidbits about Planet Hulk sounds like a fun and exciting compromise. Indeed, Marvel seems to be placing more of an emphasis on having multiple heroes team-up in Phase Three; Spider-Man: Homecoming has Iron Man and Captain America: Civil War had damn near everybody. A Thor and Hulk pairing is by far the most interesting of the bunch, and by all accounts it's coming together nicely.