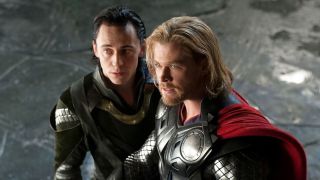 Just as Spider-Man: Homecoming stars Tom Holland and Jacob Batalon recently visited a children's hospital in Atlanta, Chris Hemsworth and Tom Hiddleston - who are currently filming Thor: Ragnarok - took some time out of their schedules to visit Lady Cilento Children’s Hospital in Australia in their casual character looks earlier this week, and they even brought Thor's magical hammer Mjolnir with them.

Met the real superheroes of the world at Lady Cilento Children's Hospital. A huge shout out to these brave kids! pic.twitter.com/VCfVIxeKfsAugust 23, 2016

Unforgettable meeting all the children at Lady Cilento Children's Hospital. They're the real heroes. 📸 @twhiddleston pic.twitter.com/KANhgb5yb1August 24, 2016

As much fun as Hemsworth and Hiddleston look like they're having it's undoubtedly even more of a great time for the kids they're coming to visit, so it's great to see the Marvel actors spreading a little love. If these set photos are any indication this might not be the last time we see Thor and Loki team-up, although they probably won't be as friendly with each other as they are here.