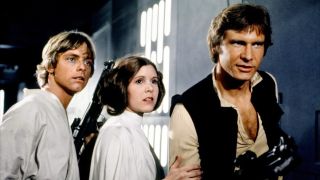 Everything’s coming up Star Wars at the moment. With Star Wars: The Last Jedi just around the corner and the just-announced new Rian Johnson-led trilogy on the horizon, you’d be forgiven for thinking there isn’t enough space to cram in any more adventures from a galaxy far, far away. You’d be wrong. Star Wars is getting its first ever fully-fledged live-action TV show.

Announced alongside that new trilogy, Disney CEO Bob Iger revealed (H/T Variety) very little about the TV show other than it wouldn’t be a cartoon a la Star Wars Rebels and that it would live exclusively on Disney’s new Netflix-rivalling streaming service. Here’s the catch: that’s not hitting until 2019 at the earliest.

While that may seem like a long time to wait, it’s worth remembering that there will be three Star Wars movies out before the service rolls out, with the Han Solo movie and Star Wars 9 releasing in 2018 and 2019 respectively.

Some may think it amounts to overkill, but I’m excited. This is a real chance to move away from the Skywalker Saga (as exciting as it is) and to explore previously untouched stories.

Star Wars: Rogue One was a big hit in that respect and – for now – our imaginations can run wild. Imagine a 13-episode Knights of The Old Republic adaptation, or something that properly fleshes out the gap between The Return of the Jedi and Star Wars: The Force Awakens. It could even switch genres. My dream show? A neo-noir detective story set on Coruscant.

What would you like to see from a Star Wars TV show? Let us know in the comments!

It’s easy to forget Star Wars: The Last Jedi is only a month away. Be sure to read up on why Mark Hamill desperately needed a mountain guide when filming his Ahch-To scenes to avoid plummeting to his death. Then try not to recoil in horror at the first look at Baby Porgs. They are not cute.