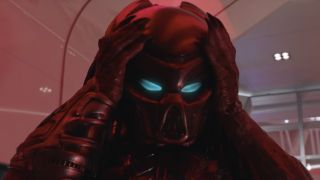 Shane Black looks back fondly on his time as Rick Hawkins in the 1987 film Predator. Oh sure, he gets brutally murdered about an hour in and is the first of our heroes to get picked off, but it's still a treasured memory nonetheless. In fact, it was a desire to revisit his youth that led Black to co-writing and directing The Predator, which lands in theaters September 14 (September 13 in the UK). Or as Black himself puts it, "I had a bit of a midlife crisis".

Speaking to SFX, Black explained what pushed him to revisiting a franchise he hadn't been involved with for more than 30 years. "I thought, 'Wouldn’t it be great, just as a lark, to go back and be a kid again? What could it hurt to revisit a time that was so special, and a type of filmmaking before video games and CG polluted the market with visual overload? When you’re forced to rely on a bit more ingenuity to conjure the same sort of effects? It’ll be a lark. Let’s do it!'"

Subscribe: Sign up for future issues of SFX Magazine to get exclusive news and interviews about shows and movies including The Predator, Disenchantment, and more.

Black confessed that such a laid-back attitude proved to be a mistake. Working within restraints of the film's budget, having to deal with Vancouver weather, filming with greenscreen, and the pressure of making a new Predator movie that could stand alongside the original proved stressful. "My God, it's been tough," Black admitted.

"The good news is that all of this knits together very well. It’s been a ride and a nostalgia thing. It was mostly a midlife crisis thing, if I were to be honest about it," Black said. "If it hasn’t exactly made me feel like a kid again, it’s certainly reinvigorated me to keep going. I’m blessed and honored to be viable in moviemaking - I’ve seen lots of people around me fall off. The fact that after 30-something years I’m still able to even do this is something I’m eternally grateful for. I don’t know why or how I was given that opportunity, but I’m grateful for it."

For more on The Predator, pick up the latest issue of SFX Magazine, on sale now.