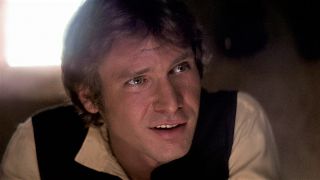 It’s not a Han Solo movie without the galaxy’s greatest smuggler getting into a spot of bother in a Cantina or two. Ron Howard is happy to see to our needs with a quick shot of an “intense” action scene set in a busy bar.

The shot, which you can see below, showcases a scrap between two (and, let’s face it, probably more) people in a Cantina – the home to various scum and villainy from around the galaxy – and, disappointingly, there’s not a pint of blue milk in sight.

Han, as Star Wars fans will never fail to bring up, has previous… let’s just say experience in cantinas, what with the whole Han shot first thing. No blasters here, though: it looks like plain ol’ fisticuffs to me.

The quiffy hair on the right probably points to Han Solo himself making an appearance and, knowing Han, trouble inevitably ends up following everywhere so it’s hardly a surprise. Even if that’s not Han in the scene you can bet that he’s not far behind.

With the release date not exactly far off, it’s nice to see Ron Howard making in-roads into a multi-layered action scene as, so far, we’ve seen precious little of things getting hot under the collar for Han and his motley crew. Here’s hoping there’s more in the way of rough-and-tumble glimpses in the near-future.

Ron Howard is fast becoming the king of the behind-the-scenes sneak-peek: If you want more Han Solo movie news then you’ll be pleased to know he’s already allowed us a glance at Chewie, as well as the first shot of Donald Glover as Lando. He’s nothing if not generous with his tantalising teasers.