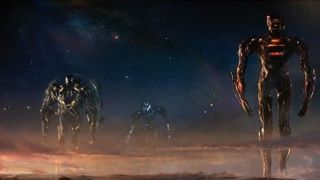 The Eternals is worlds away from anything Marvel has ever done before. With the promise of demigods and millennia-old conflicts, all wrapped up in the sort of cosmic sensibilities only ever teased in something like Guardians of the Galaxy, it could open up the MCU in an entirely unprecedented way.

That sort of scope has even been teased by star Kumail Nanjiani, who says The Eternals will be the “most epic” Marvel movie production yet, while hinting at a sci-fi direction for the upcoming Marvel Phase 4 movie.

That unique feeling even extends to the cast, which includes actors from all around the globe and from different backgrounds. As Nanjiani explained: “I was on set shooting, and the director showed me just a still of all of us together in the scene… We all look so different. It’s me and [Ma Dong-seok] and Salma Hayek and Angelina Jolie and Gemma Chan and Lauren Ridloff. You don’t ever get to see people like this together in the same room, let alone in awesome superhero costumes.”

It’s remarkable to think that, for Marvel’s 25th MCU movie, it’s still finding opportunities to introduce new stories, new experiences and, from the sound of it, a proper sci-fi superhero movie. Other Eternals news that has also emerged in recent months includes the release of the synopsis, which teases a fallout from Avengers: Endgame, while some literally out-of-this-world concept art doubles down on the fact that this will look like no other MCU movie before or since. The Eternals is set for release worldwide on November 6, 2020.

Need a refresher? Here's how to watch the Marvel movies in order.