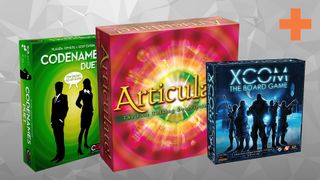 For those who avoid board games because of competitiveness around the table (or fans who just want a taste of something different), the best cooperative board games say hello. Offering unique challenges that can only be solved together, communication becomes the difference between winning and losing; these gems emphasise teamwork rather than a mad scramble to victory. As it turns out, games night is so much more chill when players aren't trying to screw each other over. Who knew?

But where do you start? There's plenty to choose from when it comes to the best cooperative board games, and that in itself can be daunting. To give you a helping hand, our team have rounded up their favorites below. You'll find suggestions that are as replayable as they are fun; board games can be expensive, so being able to squeeze maximum value for money out of them is appreciated. Accessibility is a common theme here, too. While deep mechanics are all good and well, it's easy to be turned off by something that's overly complicated (particularly if you need good board games for kids). Basically, we'd like to think that there's something for everyone here. No matter whether you want to play with a group or a need a board game for 2 players, we've got a recommendation to suit you. If you ask us, they're actually some of the best board games around.

Oh, and don't forget to look out for deals; we've included as many discounts and offers as we could find. These are updated on a daily basis, so drop back in every now and then to see if you can't get yourself a bargain. We'll also update this page as and when new contenders enter the fray. This will certainly be a guide to watch as we enter 2020, for example; among other things, we recently went to see the Divinity: Original Sin board game preview.

Team up to save the world

Defeat comes quickly in Pandemic; victory hinges on your ability to communicate. With four deadly diseases having broken out across the globe, your job is to cure and eradicate them before civilisation is overwhelmed. Unfortunately for us, these illnesses spread faster than you can say "hazmat suit". Worse still, they grow more dangerous with every passing turn thanks to Epidemic cards. You're never sure when these will appear, and things can quickly get out of hand when they do. That makes Pandemic a tense race against time in which every decision counts - the literal fate of the world depends on it. No pressure, right?

Luckily, this game's a blast from start to finish. With a focus on strategy and coordination, it epitomises teamwork. You win or lose together. And yes, it's difficult; however, Pandemic is also engrossing in a way few other games ever manage to be.

Once you've conquered the standard version, be sure to give the Legacy edition a try. This adds lasting consequences to each game, resulting in a game that's entirely unique to you.

Best for... those looking for strategy and high stakes

£7.99
View at John Lewis
£23.16
View at Amazon
£32.99
View at Waterstones
See all prices (6 found)
1 Amazon customer review
☆☆☆☆☆
Fast-paced and competitive
Can have 20+ players
Hundreds of cards included
Some won't like the pressure

Having appeared on store shelves since 1992, Articulate! is a trivia classic. Unlike so many board games, it can also be played in a massive group of 20+ people; so long as you're divided into teams of at least two per side, everyone can get involved. That makes it a real winner for parties.

Its long life isn't a mystery, either. The rules are straightforward and easy to get your head around. Taking it turns, a member of each team must describe as many words from a category as they can within 30 seconds… but they can't say what that word sounds like or rhymes with. Thanks to a broad range of subjects including Nature, World, and Action, you also don't need to be a font of obscure knowledge to win. Instead, this game hinges on your ability to verbalise something (not to mention how in sync you are with your teammates). It's a must-have.

Your goal in Codenames is like a scene from Mission Impossible, minus the improbable gadgets; you must uncover secret agents without collateral damage or incurring the wrath of deadly assassins. It’s a fun concept with a brisk pace to match, making this the perfect game for those who don’t have much time on their hands.

This version plays out in much the same way as classic Codenames, but Duet differs by having you work with other players to reveal all 15 agents on the table. Doing so isn't as easy as it sounds, either. It's a word game about being clever, efficient, and developing a bond with another person - you’ll figure out how they think, how they guess, and how they build relationships. Good luck...

Best for... quick matches when you don't have much time

Betrayal at House on the Hill

The best bits of horror in board game form

It’s not a coincidence that Betrayal at House on the Hill springs to mind when someone mentions co-op board games; its unpredictable nature, procedurally-generated map, and random scenarios result in very different experiences each time you play. What’s more, the title isn’t an empty threat. Once you’ve explored enough of the house, a ‘Haunt’ will activate and you’ll face off against a random foe, disaster, or one of your own allies turned traitor. This unexpected backstabber receives a secret rulebook and goal of their own, so teamwork amongst everyone else becomes all the more essential.

With 50 scenarios to work through and a couple of expansions that will enhance your game (including a customizable ‘Legacy’ edition), Betrayal stays fresh for a long, long time.

A game where everyone knows what you’ve got... except you

£9.87
View at Amazon
64 Amazon customer reviews
☆☆☆☆☆
Easy to understand
Gets your brain going
Extra cards can make it harder
Potential for argument if Knowledge is wasted

Hanabi flips standard card game rules on their head; rather than keeping your hand a secret, everyone else can see it but you. Players take on the role of a firework master who’s messed up their display, and the aim is to reassemble rockets by ordering sets of numbered cards from one to five. Not knowing what you’ve got makes this a bit tricky, obviously. That’s where Knowledge tokens come in. These are used to reveal something about another player’s hand (e.g. “you have three ones”), but there are only a finite number of them available. And because there are than two of most cards, any wrong move could spell disaster. As a result, Hanabi becomes a dangerous balancing act of memory and educated guesswork.

Best for... those who want to try something different

XCOM: The Board Game

Protect Earth at all costs

For fans of the turn-based strategy shooter, this board game ticks all the boxes. XCOM's distinct combat, science, economy, and management are perfectly translated into this tabletop adaptation, and each player takes responsibility for one of those disciplines here. You're also running out of time; civilisation is collapsing, and everyone must work in tandem if they want to avoid annihilation. It's you against the world (or, in this case, an app that controls your alien foes).

That free app is one of the biggest selling points for XCOM: The Board Game. It decides when you'll be attacked, what the extraterrestrials will do, and how long you have to finish any given task. What's more, a "push-your-luck dice mechanic partners with the use of the app to heighten the game's tension and drama". Thrown in detailed miniatures and you've got a very appealing package here.

Best for... tense, strategic gameplay with a twist

You should check out Forbidden Island if you like Pandemic; they’re cut from a very similar cloth. Fans of one will probably love the other, and they both task you with battling against the clock as well as the odds.

Rather than stopping disease, this game sets you on a race against time to save artefacts from a sinking island (basically, you’re Indiana Jones). Because it shares the same collaborative focus on teamwork and strategy, you’ll need your wits about you to make off with the biggest treasure haul. The mechanics are also similar to Pandemic’s, but they play out on a noticeably faster timescale - the ocean waits for no-one, after all. In a helpful twist, Forbidden Island is fairly short.

Best for... fans of Pandemic who are short on time

Pit your wits against the master detective

Do you often solve a TV/film murder mystery before the hero? Good news - Sherlock Holmes: Consulting Detective capitalises on that, up to and including the “aha! I have it” moment (even if you don’t). You and up to 7 others play as Baker Street Irregulars who’ve been sent to gather evidence, search the muggy streets of London for clues, peruse newspapers and case files, and attempt to solve the case before Holmes himself does. Time is your enemy here; every move brings Holmes closer to closing the case without you.

Make no mistake, Consulting Detective is a tricky game. All the same, it’s a memorable cooperative experience that’s different to almost everything else out there before or since it launched in 1981.

Best for... those who want to get their thinking caps on

Your car’s broken down and you have to take shelter in an abandoned cabin. When you wake up, the door’s locked, iron bars have slammed shut over the windows, and a crazy madman is leaving you challenges. It’s a scenario that fills you with confidence right from the start, doesn't it? Mimicking an Escape Room, Exit has you unravelling puzzles as quickly as possible. Riddles and other conundrums will block your way out, but the clock is ticking.

There are many different versions of Exit out there, yet The Abandoned Cabin version shines as a co-op experience. Despite being a one-and-done affair (you'll be folding, tearing, and drawing on game materials to solve those brain-teasers), the low cost eases that blow. How are your powers of memory and communication? You’ll soon find out.

How long can you survive?

The dead have risen and you’ve got to survive until dawn - bad luck, chum. Fortunately, beating back the zombies is a laugh. Despite the severity of your situation, this isn’t an overly serious game. Its characters are tongue-in-cheek horror tropes and event cards include the likes of an old school teacher appearing from nowhere to save you with a woodworking saw. It’s both stupid and wonderful. What's more, there are  expansions to try out if you fancy adding to your game.

Most players control the 'survivor' team, while another is in charge of the necrotic horde. You’ll then select a random objective that you need to see through before your time runs out, but tread carefully - this game's combat is unforgiving. Good teamwork is required for the living to achieve victory as a result.

Best for... horror fans with a sense of humour