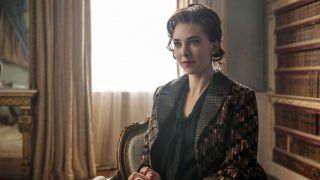 Now we know Robert Pattinson will be donning the cowl as the Caped Crusader in The Batman, it’s time for the motley crew of heroes and villains surrounding The Dark Knight to take shape. One such role is Catwoman and, according to a recent report, Mission: Impossible - Fallout’s Vanessa Kirby is part of the shortlist to potentially play cat burglar Selina Kyle.

As touted by The GWW, Kirby is supposedly in The Batman director Matt Reeves’ sights as the wheels begin to turn in the casting process. Kirby (apparently) finds herself on a shortlist with other unnamed actresses, though GWW’s sources say “formal talks haven’t begun yet.”

While Kirby does not have quite the same international appeal as the last two Catwomen – Anne Hathaway and, lest we forget, Halle Berry – she more than makes up for it with an extensive CV featuring multiple action flicks.

Not only has she appeared in the most recent Mission: Impossible movie, but she’s also going toe to toe with The Rock and Jason Statham in this summer’s Fast and Furious spin-off, Hobbs and Shaw. You may also recognise the British actress from her turn as Princess Margaret in the first two seasons of The Crown.

This isn’t the first time that whispers of a casting wishlist has surfaced when it comes to The Batman. Earlier this year, Robert Pattinson and Nicholas Hoult were in what seemed like a very public face-off as to who would become the latest actor to play Bats. Pattinson, of course, won out amid speculation about costumed screen tests. No word on if it involved Bat-nipples, though.

With The Batman set to reach cinemas June 2021, don’t be surprised to hear more talks about the likes of Vanessa Kirby as Catwoman, as well as possibly Batman’s rogues’ gallery filling up, across the coming weeks and months.

Whisper it, but The Batman could very well be troubling our list of the best superhero movies in just a few years.