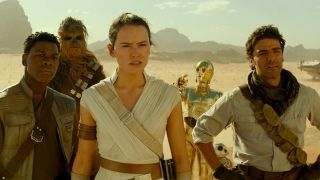 It’s the question you’ve been curious about but too afraid to ask: is there a Star Wars: The Rise of Skywalker post-credits scene? After all, Marvel's Kevin Feige's working on Star Wars these days, so has he brought the post-credits scene with him?

We’ll just say it up front: no, no, there isn’t. But that doesn’t mean you shouldn’t stick around through the credits. Below, we’ll tell you spoiler-free what happens during the credits and what’s included instead of a Star Wars: The Rise of Skywalker post-credits scene.

So, Rise of Skywalker is over. Should you try and traverse the rows of sticky popcorn and make a hasty exit? You certainly can. There’s no Star Wars: The Rise of Skywalker post-credits scene. No tease for a spin-off, no after-credits stinger, and no setup for Episode 10.

What there is, however, is a celebration of everyone who came together to create Episode 9. There are the headline names – such as the late Carrie Fisher – in the credits, but then there are the people behind-the-scenes who make the magic happen. From the Grip, to the Best Boy, to the assistants upon assistants upon assistants, it’s always nice to see those who have poured months of their life into this project get some well-deserved recognition.

Unlike Avengers: Endgame, however, this is a pretty standard set of credits; no individual character frames or send-offs in the same way the MCU blockbuster did with the likes of Captain America and Iron Man. And after the credits? Just the logos for Abrams’ production company Bad Robot and Lucasfilm. Then a dark screen for you to take in everything you’ve just seen.

Catch up on the story so far with our Star Wars timeline.