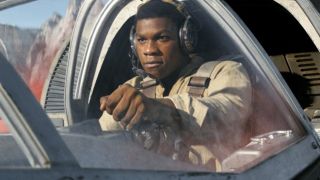 If, like me, you’re eagerly rocking back and forth in anticipation for the new Star Wars: The Last Jedi trailer, then you might want to cool your blasters for just one second. Director Rian Johnson is split down the middle on telling fans to give the trailer a watch (or seventy) and he’s got a very good reason for it…

Taking to Twitter, Johnson addressed his previous comment (and fans’ concerns) about wanting to go in fresh for Star Wars 8. Here’s what he had to say.

I’m torn too. On one hand, trailers gave way too much away these days – almost acting as an abridged movie at times – but it’s Star Wars. You know it’s going to be everywhere and you know full well you’re going to want to watch it. Besides, Johnson has still said it’s “gooooood”. No, he hasn’t accidentally fallen asleep on the O key. I think.

So, to watch or not to watch: You won’t have long to wait to make up your decision. There were whispers of a trailer coming very, very soon – as it turns out, 9 October was the date to mark in your diary.

The trailer will air during ESPN’s Monday Night Football show at half-time. The game between the Vikings and the Bears kicks off at 8:30pm EST/1:30am BST so expect the trailer to hit at roughly 10:00pm EST/3:00am BST, depending on how quickly the game goes.

If you miss it I’m sure you’ll be reminded by a million people on Twitter going quackers over it, so don’t worry.