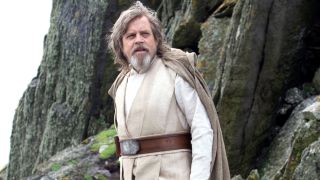 Star Wars is nothing without its weird and wonderful creatures and aliens, from the Cantina band to womp rats to even (*shudder*) the Ewoks. And Star Wars: The Last Jedi is no exception, as a possible new sea creature has emerged from the depths – and I can’t tell if it’s cute or wants to kill me.

StarWarsNewsNet have reportedly glimpsed photos of the sea creature on Ahch-To (Luke’s current digs) and, through the skilled hand of artist Eli Hyder, have created a composite image of... holy-moly what the hell is that?!

Heres a closer look at the sea creature in Star Wars: The Last Jedi on the planet Ahch-to! : pic.twitter.com/LSnyATqVSf11 June 2017

Where to begin? For one thing, it’s huge, dwarfing many a creature from the Star Wars universe. It’s roughly just over 9 feet and, let’s face it, looks as cuddly as all hell.

Those arms and legs look totally impractical but, hey, I wouldn’t say that to its face. Talking of the face. Eww, gross. Those tentacle things probably aren’t just for show.

Will Luke and Rey have to deal with… whatever that is? Hopefully not, but it might be a good warm-up before Luke possibly gets shit done in an epic final act.