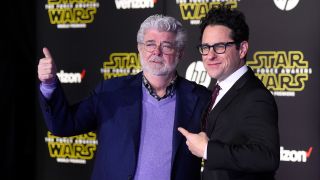 Star Wars: The Rise of Skywalker reportedly has a secret George Lucas voice cameo. But, wait, there’s more: if the whispers ring true, it means the father of Star Wars has also had a (loud) presence in both The Last Jedi and Rogue One without anyone realising.

The surprising reveal comes from a Good Morning America interview with Rise of Skywalker sound designers David Acord and Matt Wood. GMA’s sources indicate that there is a “deep audio Easter egg: a scream that is actually the voice of Star Wars creator George Lucas. The clip, affectionately called “The George”, was originally recorded for the director’s 1973 film American Graffiti." GMA also confirms, “it has appeared in several movies, including Rogue One: A Star Wars Story and The Last Jedi.”

Acord and Wood, though, remain coy about their “calling card.” Not only will they not confirm where the scream features in Rise of Skywalker, they won’t even say who recorded the clip, only that “a very special scream” is definitely part of The Last Jedi. Let’s hope it’s Lucas. Even the visual of him recording in a booth is a bit brilliant.

So, the hunt is on. While the Star Wars: Rise of Skywalker home release date hasn’t yet been announced, that’ll be the day where we can start combing through Episode 9 frame-by-frame and, more importantly, scream by scream. Then we’ll finally crack open what could be one of the strangest, most obscure secrets in the sequel trilogy.

Catch up on all things a galaxy far, far away with our complete Star Wars timeline.