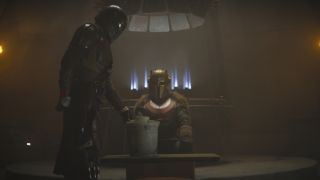 A long time ago, in a galaxy far, far away, a man ran through Cloud City with what appeared to be an ice-cream machine in his hands. Well, that's what Star Wars fans thought... until now!

Turns out, Willrow Hood – who was that very man spotted rushing through Lando Calrissian's floating city with a weird-looking object in Star Wars: The Empire Strikes Back – was not carrying an ice cream machine at all, but a "camtono".

How do we know this? Well, in the most recent episode of the Disney Plus series The Mandalorian, the eponymous bounty hunter meets with Werner Herzog's The Client to claim his reward for tracking down Baby Yoda (not Yoda's actual baby, we know). The Client presents Mando with what looks suspiciously like an ice cream container, only for the device to open and reveal his spoils.

Now, think back to the season premiere, when The Client promised a "camtono of Beskar". That's what's being handed over.

Are we making a silly logic-leap here? Sure, you could argue that it's just a similar-looking container. However, let's quickly take a look at showrunner Jon Favreau's Instagram page. A few months ago, before season 1 had even begun, the filmmaker posted an image of the "camtono" online.

Fans immediately jumped on the item, speculating about how Willrow Hood could come into the series. Of course, Hood has not returned just yet, but the item has, and we now know its name.

Now, how did the ice cream container get that exact name? Digital Spy has done some digging, and found a video of a young girl trying to say ice cream. Instead of saying "ice cream" though, the youngling says: "Camtono." The viral video has over 1.5 million views – perhaps Favreau was one of them?

The Mandalorian continues weekly on Disney Plus. You can see the full Mandalorian release schedule to see how many episodes we're getting this year.

- Sign up to Disney Plus here, complete with a seven-day trial.