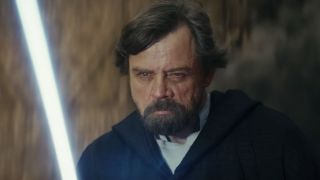 How did Luke Skywalker’s lightsaber end up in Maz Kanata's hands? The iconic blade was last seen falling from Cloud City in Star Wars: The Empire Strikes Back, yet somehow ended up playing a crucial role in the sequel trilogy. Fans have been confounded by the conundrum of where Luke's lightsaber is for over four decades – since the Jedi Knight's climactic fight with his dear daddy Darth Vader. Now, thanks to a new Star Wars comic, we finally have an answer.

The reveal comes on the final splash page for Star Wars #2 (H/T IGN). Luke’s famous blue lightsaber tumbles down Cloud City and is caught by… a hooded figure in a robe. Their identity hasn’t been revealed yet – you’ll have to buy issue #3 to see what happens next – but the unknown person speaks three intriguing words: “Follow your destiny.”

Although it was previously easy to assume that someone, somewhere, picked up the iconic weapon, it’s nice to finally know the fate of Luke’s lightsaber. However, there's still no news on if anyone caught his hand...

Whether the Marvel comic series will chart the course of Luke’s lightsaber until it makes its way to Rey in Star Wars: The Force Awakens remains to be seen, but it’s undeniably cool to see more gaps in the lore being filled in by supplementary material.

The great Star Wars Legends purge, which made all Expanded Universe side stories and comics non-canon back in 2014, saw a bunch of hidden corners of the universe return to being left unexplored, including the lightsaber's fate. In the Legends stories, the blade was eventually recovered by Darth Vader after being found by a Cloud City employee. Star Wars #2 changes that, and makes the hooded figure canon.

Star Wars #3 – which may clue us in on the person now in possession of Luke’s lightsaber – is due out on February 26, while the solicitation for future issues on the Marvel store (possible spoilers) suggests March’s fourth issue will feature Luke on the hunt for his missing lightsaber.

From A New Hope to The Rise of Skywalker, get the full story in a galaxy far, far away with our Star Wars timeline.