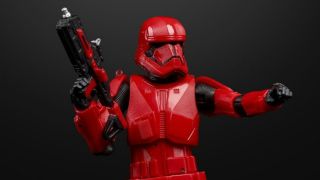 Get ready to hit the pre-order button. Star Wars 9 Sith Troopers have been revealed as the latest in a long, long line of cannon fodder and generally rubbish marksmen. The Rise of Skywalker’s newest First Order Stormtroopers also come with one of the coolest designs ever seen in a galaxy far, far away and a sleek red colour palette to boot.

As revealed on the official Star Wars website, The Sith Troopers will make their bow at the upcoming SDCC 2019 and, yes, that means action figures and Funkos aplenty. The Star Wars 9 Sith Troopers not only look the part, but they also come bundled with a black-and-red SMG-style laser gun. Perfect for mowing down any pesky Jedi or foul-mouthed droids.

While the SDCC 2019 schedule has been locked down in terms of panels, there’s still a bunch of great exhibits still being announced, as evidenced by the big announcement during the latest episode of the Star Wars Show; an Evolution of the Stormtrooper display – covering everything from the OG Stormtroopers, through to Star Wars Rogue One’s Death Troopers and, yes, the Sith Trooper, will be at the Lucasfilm booth.

But how do the Sith Troopers fit into Rise of the Skywalker, aside from hinting at Kylo Ren and company wanting to get a slice of that merch money from Tatooine and beyond?

The Star Wars Show explains that these Sith Troopers are the “next evolution of the Imperial First Order soldiers.” It’s not yet known if they have any additional abilities – which could be the case as they’re explicitly described as ‘Sith’ – but you can bet they’re a lot more fearsome (and better shots) than your average, vanilla Stormtroopers.

Interestingly enough, they also share several design similarities with a certain former Supreme Leader Snoke’s Throne Room guards. Despite Kylo Ren (and Rey) putting them to the lightsaber in Star Wars: The Last Jedi, it appears that the galaxy’s new ruler has taken some design tips with him, if not his former mentor’s ruthlessness when it comes to wiping out the Jedi.

Take a peek at some of the new Star Wars movies coming your way after Rise of Skywalker.