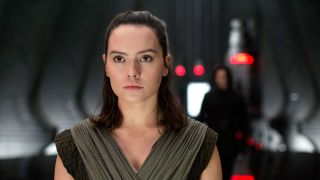 It’s one of the biggest mysteries heading into Star Wars 9. Forget the Emperor’s laugh for a moment, because Daisy Ridley is intent on bringing back one of 2017’s hottest water-cooler conversations: who are Rey’s parents? This all comes off the back of Ridley revealing in a recent interview that everything will be cleared up by the end of The Rise of Skywalker.

“[Director J.J. Abrams] did say the question [over the identity of Rey’s parents] will be answered,” Ridley told USA Today. “So, at the end of the film, you know what the dealio is.” No, that’s not a typo. She actually said dealio.

If you thought the identity of Rey’s parents was revealed in Star Wars: The Last Jedi, then, no, we’re not playing Jedi mind tricks on you. Director Rian Johnson’s film did actually answer the mystery, but in a roundabout way.

During a bit of Force bonding between Kylo Ren and Rey, the Sith Lord reveals that Rey’s parents were actually… no one important. Specifically, that they were “filthy junk traders, who sold [Rey] off for drinking money. They're dead in a pauper's grave in the Jakku desert.”

Johnson has approached the topic himself in the past which, when coupled with Ridley’s comments, adds further doubt to the ‘answer’ we were given about Rey’s parents in the eighth mainline instalment in a galaxy far, far away. Johnson previously explained that Rise of Skywaker will be “open” to changing who Rey’s parents are, because he has no final say when it comes to the story itself.

So, let the big, bombastic theories unspool on messageboards from here to Tatooine. Ridley has already stoked the flames – and the conversation around Rey’s parents probably won’t burn out until we get a definite answer once and for all come December.

Here are all the new Star Wars movies coming your way in the next few years.