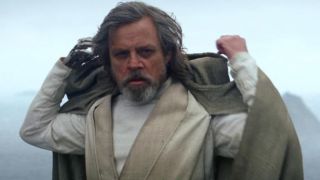 Star Wars: The Last Jediis arriving this year… and we’ve heard very little. But director Rian Johnson is pulling back the curtain slightly, teasing us just a little bit in preparation for 2017’s biggest movie - and Luke Skywalker is at the heart of it all.

So, what’s the deal with Luke? Don’t worry, Rian Johnson is right on top of that that, with USA Today reporting that Johnson feels, “What’s going on with Luke Skywalker?” to be the question surrounding Star Wars 8. Meanwhile Rey is “having a lot of expectations in her head about how [meeting Luke] is going to go.” Remember your first day at school? Times that by a billion.

Rian Johnson has also revealed a bit more about sequel to The Force Awakens, specifically what’s going to be the deal with main characters and what “makes [Finn, Rey and Poe] tick.” Johnson explains, “I wanted to know more about each of them… figure out what’s the most difficult thing each of them could be challenged with now - let’s throw that at them and dig into what really makes them tick by seeing how they handle that.”

Just don’t go expecting Empire Strikes Back levels of trauma because Johnson wants Star Wars 8 “[T]o be a blast and to be funny and to be a ride the way The Force Awakens and the original Star Wars movies were.” Not mentioning the prequel trilogies says a lot, don’t you think?

Probably the coolest revelation is that Rian Johnson has had a title for Star Wars 8 locked in since “the very first draft,” but he’s being a big ol’ spoilsport and not telling… yet.