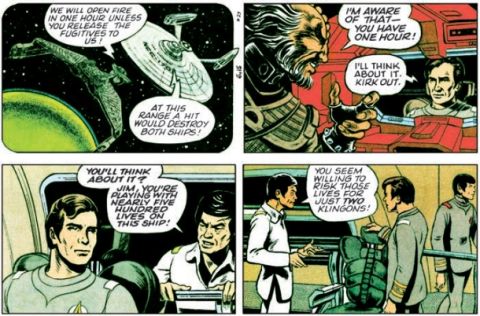 Star Trek: The Newspaper Comics 1979-1981 review: Daily going where no man has gone before

It’s hard to believe there remain any Star Trek comics that haven’t received the complete collection treatment, but that’s the case. This entry in IDW’s The Library Of American Comics line collects the American daily and Sunday newspaper strips from the turn of the ‘80s. The first volume features the first ten story arcs; a second will eventually follow (which will feature a strip co-written by Ringworld author Larry Niven – a sequel to “The Slaver Weapon”, his episode of The Animated Series ).

Making their debut a few days before The Motion Picture hit cinemas, these strips feature the uniforms from the movie. They’re in stark contrast to their Gold Key Comics forebears, infamous for their outlandish concepts, poor likenesses and out-of-character behaviour. The newspaper strips are clearly the work of someone with more knowledge of the franchise (as repeated riffing on Dr McCoy’s “I’m a Doctor, not…” catchphrase and lines like, “I wouldn’t trust him as far as I could throw a Horta!” underline) but are also are rather less fun. The scenarios are very standard: a stand-off with the Klingons, a mission to evacuate inhabitants of a planet facing destruction, and so on.

The first eight adventures are written and drawn by Thomas Warkentin, and don’t really make the most of the medium’s possibilities, set as they generally are in space or Earth-like environments. One sees the crew take shore leave on “the most boring planet in the quadrant”, but by that point you may feel you’ve already seen a few contenders for the title.

The format has its own inherent frustrations. Monochrome weekday strips are followed by bumper Sunday entries in colour, and the Monday entry is a recap of the weekend’s developments. There’s no room for splash pages of course, and while Warkentin’s likenesses are excellent, sometimes there’s not much more to them – there are quite a lot of grey backgrounds.

When Ron Harris takes over for the last two strips in this volume there’s a noticeable step-up; his art is less clean but has far more depth, detail and dynamism, finally providing a reason for the eye to linger.

Only a couple of strips linger in the memory, and that’s because of the more ludicrous plot elements: one features a planet that turns out to be a giant egg, while another sees Kirk and Spock sharing a hot tub as they hold a conference with some amphibian aliens!

The chief source of interest is the way the writers made use of the existing continuity, or added to it. Intergalactic conman Harry Mudd pops up in one story, Uhura reveals she “holds the record for the Pan-African Games 100 metre dash”, and we see Nurse Chapel promoted to Dr. We also meet McCoy’s ex-wife, and a Native American Ensign called Greywolf. Another crewman is a Distotian – one of a race of green-skinned, boggle-eyed creatures who have no skulls.

As you’d expect, given the price tag, it’s a well-presented and very thorough collection, bookended by rarities: artists’ audition strips and scans of another forgotten strip from the same period: an adaptation of The Motion Picture that played out across McDonald’s Happy Meal boxes! Trek completists will be delighted to have the opportunity to finally own these rare tales. But if you’re looking to invest in your first Trek comic, this isn’t the place to start.