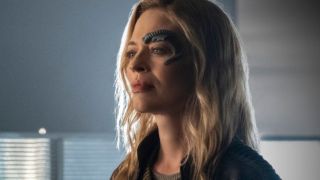 Ever since the Borg first started telling us that “resistance is futile” back in 1989, they’ve been the most formidable adversary in the Star Trek universe.

It’s appropriate, then, that the Borg will play a key role in new sequel series Star Trek: Picard. We’re not entirely sure what form they’ll take – executive producer Alex Kurtzman told CNET that it’ll be “a new version of the Borg you haven’t seen” – but we do know that at least two familiar Borg faces will be back.

Jeri Ryan played Seven of Nine, a former drone who gradually rediscovered her humanity, over four seasons of Star Trek: Voyager. Some two decades later the character is still around and reportedly living as a freedom fighter. But, as Ryan tells GamesRadar+, Seven’s shared Borg heritage with Picard doesn’t mean they’ll be BFFs.

“I wouldn’t say there’s a huge affinity because Seven’s gotten pretty jaded over the last 20 years,” Ryan reveals. “She’s seen a lot of bad stuff, and she’s very much hardened from when we saw her 20 years ago. The universe has kind of gone to hell in a handbasket and she holds Starfleet and the Federation in a large part responsible for that. Initially, I think she sort of sees Picard as a representative of that, so she’s not in ‘idol worship/he’s a hero’ mode when we first meet her. I think that makes it more interesting.”

There’s also a return for Jonathan Del Arco as Hugh, a Borg drone who developed an unprecedented sense of individuality after an extended stay on the Enterprise in Star Trek: The Next Generation. He’s since become a leader for other disconnected Borg.

“In the story you’ll see it’s a very logical conclusion to where Hugh ends up,” Del Arco explains. “But what I didn’t know were the circumstances of the world or how that affected how he ended up. He’s changed so much physically, and emotionally, and grown up like other people grow up. How many people do you know from high school who are the same in their forties and 50s? Not many. But I wanted for the audience to have a thread because he was beloved as who he was.”

When it came to working out what Hugh had been up to since we last saw him in Next Generation two-parter “Descent”, Del Arco reveals he never had all the answers.

“There’s lots of novels about what happened to the Borg and possible stories that could have developed,” he says. “So [creating Hugh’s backstory] was a combination of talking to producers that had deep knowledge on the canon, but also some of my own imagination, because you know when you’re an actor you don’t have to tell anybody how you got there – you could make up anything you want in your head!”

GamesRadar+'s sister publication SFX spoke to Star Trek: Picard's leading star, Sir Patrick Stewart, about his future in the Star Trek universe, with the actor revealing he would love to work with Quentin Tarantino. We also spoke to Alex Kurtzman about how Picard unites the Star Trek timelines.

If you're ready to dive in and check out the new series, we've put together a guide on how to watch Star Trek: Picard online.