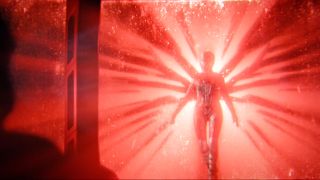 If you’re watching Star Trek Discovery season 2, chances are you’re just as desperately trying to guess who the Red Angel is as much as we are. It’s one of the biggest mysteries on the show (along with the Red Signals and whatever they are) and as soon as we found out that the Red Angel is actually a time-travelling humanoid in Star Trek Discovery season 2, episode 6 (thanks Saru’s eyes), we started trying to guess who might be in that winged suit.

Given the laws of TV there’s a good chance that it’s someone we already know from the show, whether that’s a character from the past, present, or future. Burnham? Spock? Lorca?! Who do you think the Red Angel is? While you try and decide read on for our writers predictions on who the Red Angel is and vote in the poll at the end to have your say.

The Red Angel is… Spock

Given how long it took Spock to turn up in the new season of Star Trek Discovery, I think it would nice to find out he was there all along! It felt like we talked about nothing but the iconic Vulcan for six solid episodes before he finally made his debut in episode 7, but in that time we did learn a lot about him from Burnham and Pike’s investigation into the Red Signals and his disappearance. One thing we found out is that Spock knew about the Red Signals months before they appeared to Starfleet and Burnham and Pike spend many a conversation discussing how this is possible. Do you know the most logical explanation for this? Spock is the one who’s causing the Red Signals and his drawing wasn’t a prediction of the future, but a plan he’s now carrying out at the Red Angel.

‘But Spock is with Burnham after getting his brain all unmuddled on Talos 4’, I hear you cry. Oh I’m not talking about that Spock... I’m talking about Future Spock (or potentially Parallel Universe Spock) who’s come back in time to fix some series of catastrophe events his past self was involved in. Trust me, it’s all part of his genius plan! There’s even precedent for this as Spock travels back in time in the J.J. Abrams’ Star Trek reboot and although this is set in a different timeline, it wouldn’t be the first time Star Trek Discovery uses inspiration from another Trek timeline for events in its show. Clearly, the Red Angel is Spock. It’s only logical. Lauren O’Callaghan

I totally agree with Lauren on this one. The two big talking points from Season 2 so far have been the red signals and the arrival of Spock. It might be too obvious to say the two are linked but that does seem like the logical conclusion. The biggest factor for me is that current timeline Spock knew the location of the signals before they appeared. Then after they appeared those same signals have been leading the Discovery on a little treasure hunt to ‘fix’ the planets in danger. It’s almost like the signals are warning signs that something isn’t right at that location. My guess would be that by leading the crew of the Discovery to these locations the Red Angel is stopping events that in another timeline caused a chain reaction of death and destruction. But that’s the kicker: this theory only holds up if we assume that Spock has either somehow traveled back in time, or we’re seeing an alternate dimension version of him in the form of the Red Angel. But it’s not like the show hasn’t gone down that path before. James Jarvis

The Red Angel is… Michael Burnham

The first thing I thought when we got our first proper look at the crimson curiosity? Those are a woman's hips if ever I've seen them. I don't want to sound like a sexist from 1976 or anything, but I've been to enough yoga classes to recognize the female form in skintight textiles. Why do I think it's Burnham and not Tilly? I'd love for it to be Tilly, but Burnham's connection to Spock would explain why the visions haunt him so, and a line from Emperor Georgiou in episode seven keeps rattling around my head. "I know so much more about you than you can imagine. But that's for another time." Rachel Weber

The Red Angel is… Tilly

We know that the Red Angel is human after Spock’s mind meld and, from the clear look we got through Saru’s enhanced eyes, she’s also very clearly female - no man has a set of hips like that. Given Discovery's love of surprise reveals and twists it’s very unlikely that it’s just some random character we’re going to meet later. Which means it has to be one of the more prominent female characters. Burnham is an obviously assumption, as is her mother (who’s made it clear she will go to any lengths to protect her son) but they both have different body shapes to the Red Angel’s shorter, curvier figure. Georgiou’s another option but it’s hard to see her being altruistic unless what’s she’s doing helps her. Based off body shape alone Tilly looks like the most likely candidate. So how could Tilly end up as the Red Angel? Well, we’ve had an entire episode dedicated to Tilly’s Spore connection, meaning she’s primed to gain some sort of odd connection to the mycelial network which could lead anywhere in terms of powers. Maybe Stamets is going to rig some sort of Spore drive travel suit… for reasons, that accidently lets her travel through time. Leon Hurley

The Red Angel is… Georgiou

Yeah, I know this is quite unlikely. But I agree with Rachel and Leon about the Red Angel’s body type - it definitely looks like a woman with those hips - and we know that Georgiou is bizarrely invested in Michael, even though she’s not the Michael Burnham that was treated like Georgiou’s daughter in the Mirror universe. Anyway, Section 31 has its fair share of dubious techniques for getting information (they were going to rip Spock’s mind apart to get information about the Red Angel, remember), and you can bet that if they got their hands on time travel technology they’d want to use it to keep the universe safe. That could leads to a catastrophe that gets Michael killed and Georgiou, being the maverick that she is, might steal the technology to go back in time and make sure that everything is in place to ensure Michael stays alive.

Guiding Michael to the important places in the universe that need saving, she reconnects her with her Spock, ensures Saru can defend her with his threat ganglia gone (as well as awakens the Kalpians to their predator evolution), saves those humans on Terralysium and awakens Jacob to the truth. All of these things might have an important role to play in the future: perhaps Jacob develops technology to help the Discovery, and Spock’s heart-to-heart with Michael helps them trust each other at a critical point in the story. Georgiou could be doing all she can to make sure that there’s a chance of saving Michael’s life...and this theory also confirms that Georgiou does have a heart. Zoe Delahunty-Light

Now you’ve heard from our writers, vote on who you think is the Red Angel below.

Could Lorca be back in Star Trek Discovery season 2? Let’s look at the evidence for and against, or watch the video below to find your next TV binging obsession!