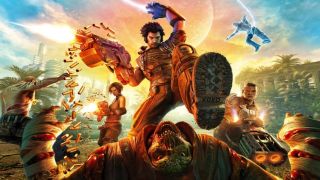 A Bulletstorm remaster for PS4, Xbox One, and PC has been outed by the Brazil Advisory Rating Board, and it's being published by Gearbox under the name "Bulletstorm: Full Clip Edition". Look, I don't know how you're taking this, but there's something you should know. I don't drink coffee. I don't have any in the house. I don't know how it got in my mouth. But I still spit it at my monitor when I saw the listing.

Struggling to remember the game? Development of the sci-fi shooter was led by Gears of War designer Cliff Bleszinski, and it was marketed as the crass, humorous alternative to self-serious games like Call of Duty and Halo. Players could lift enemies into the air, then kick them in the crotch, and score extra points for knocking them into things like cacti or hot dog carts. There's also this infamous exchange:

If you have any doubts as to the veracity of the listing, keep in mind this is the same ratings board that revealed BioShock: The Collection. Plus, several outlets reported receiving spruced-up Bulletstorm screenshots from Microsoft at E3 - though the company refused to comment on them. It's legit, and it's coming next year.