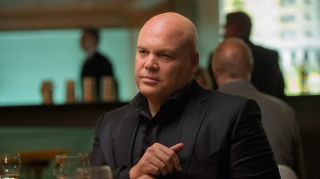 Although there is the occasional reference here and there, there is not much connectivity between Marvel's cinematic and TV properties. Given the logistic challenges (among other things) that's understandable, but there's no denying that the strategy is leading to plenty of missed opportunities.

That's particularly the case when it comes to Vincent D'Onofrio's Wilson Fisk aka Kingpin; the actor has deservedly won praise for his outstanding portrayal of the  villain in Netflix's Daredevil series, and there has been speculation that the character might show up in Spider-Man: Homecoming next year.

Check out what D'Onofrio had to say about the rumours below...

Sorry folks but this is news to me.It would be great but I don't think it will happen. V. https://t.co/GrVwbUYsqXMay 20, 2016

I love all this action about me doing #SpiderMan Tell Marvel!!! pic.twitter.com/1vPp3G9QqIMay 21, 2016

As much as I would love to see this happen, I doubt it's in the cards; Aside from the fact that TV and movie crossovers don't seem to be on the MCU agenda, Michael Keaton has now been confirmed as Spider-Man: Homecoming's villain. Kingpin is closely connected with Spider-Man in the comics, and now that we finally have two well-loved versions of each character it would be a real shame if they didn't collide at some point. Here's hoping Marvel can make it happen.