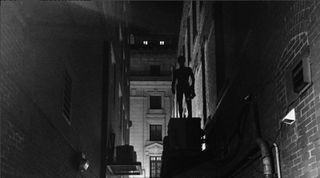 We've gotten no shortage of brightly lit photos from the set of Spider-Man: Homecoming ever since filming began, but the latest pic is decidedly more moody. Shared by the film's star Tom Holland - who makes sure to thank stunt co-ordinator George Cottle in the pic's caption - it sees Spidey perched on an AC unit in a dark alleyway.

Thank you to @georgejcottle and his amazing team for making me look like a badass. #spidermanhomecoming #stunts

Just Jared also managed to snap a couple of shots of Marisa Tomei, who recently arrived on set to film her Aunt May scenes...

We probably won't get any context from the scenes these photos are taken from for a while yet, but the steady stream of mysterious images and videos are a fun way to update fans on filming (not to mention being a great showcase for Holland's acrobatics).