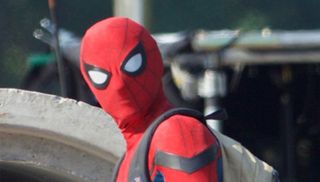 Marvel movie sets look like one of the most fun places to hang out. Take that Captain America: Civil War gag reel for instance; it makes Marvel productions feel kinda like summer camp. Except the kids get million-dollar checks not participation awards. The same goes for the first new webslinger flick Spider-Man: Homecoming that appears to have adopted that same attitude by the looks of these newest set videos.

First up is one from director Jon Watts, that shows Tom Holland looking pensive as he contemplates his vivid green surroundings:

Ah yes, that's not a beautiful forest setting that our newest Peter Parker is gazing upon, but a massive load of greenscreen. It always blows my mind whenever behind-the-scenes clips and VFX reels confirm that seemingly mundane scenes in movies (without digital characters) turn to CGI for large-scale backdrops. Wonder what he's pondering there. Let's hope it's not the death of Uncle Ben. Seriously.

Next up is another clip showing off Holland's athletic prowess. He seems confident in his skills, when he absolutely nails a move that most of us wouldn't dare attempt. More brazen though is the challenge he throws down at Chris Hemsworth, aka Thor. Question is, will he accept?

@chrishemsworth and @bobbydazzler84 beat that!