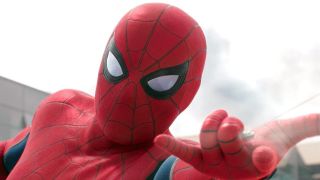 Marvel's got a lot more riding on Spider-Man than we previously thought. Not only is the character starring in at least four more movies between now and 2019 (and I say "at least" because the number seems to be growing every week), but the sequel to Spider-Man: Homecoming will be the first in the MCU Phase 4 set of films.

"So much happens in [the 3rd and 4th Avengers movies], as you can imagine, and so much is affected by it that we felt what better person to hold your hand and lead you into the next incarnation of the MCU in a grounded, realistic manner, than Peter Parker?" MCU head honcho Kevin Feige recently told io9. "So, coming out two months after Untitled Avengers, [that’s what] much of what the next Spider-Man film will be about."

If all of that sounds like gobbledegook, here's as quick an explainer as I can give: Since there are so many movies in the MCU, Marvel and Disney have divided their storylines into "phases" which share an overarching theme or timeframe. Phase 1 was about introducing our heroes and culminated in the formation of The Avengers. Phase 2 rounded out the world of the MCU, brought down SHIELD, and reached its zenith with Avengers: Age of Ultron. Phase 3 (which we're in now) is about our heroes becoming divided before uniting to take down uber-villain Thanos in Avengers: Infinity War and the as-of-yet-untitled Avengers 4.

Most of the world hasn't seen Spider-Man: Homecoming yet, but it's been clear from the trailers that it has close ties to the events of Captain America: Civil War. It sounds like the same will be true of Homecoming 2 (or whatever it ends up being called) and its relation to Infinity War and Avengers 4.