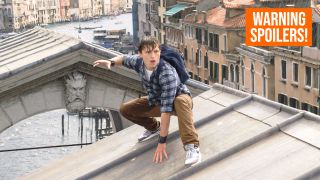 The two Spider-Man: Far From Home post-credit scenes are among the most crucial in MCU history. Yes, they’re that important. Not only do they leave the webbed wonder in a sticky predicament come the Spider-Man: Far From Home ending, there’s also the small matter of how it moves to set up Marvel Phase 4. There was a whole lot to take in and, amid all the hooting and hollering, some of the smaller details might have been lost.

For the lowdown on each Spider-Man: Far From Home post-credits scene, as well as how might dramatically affect everything from Nick Fury’s covert plans, to a certain Secret Invasion, swing on down below. It’s perfect for reliving *that* moment again, as well giving you a primer before Kevin Feige inevitably reveals his grand billion-dollar plan to the world. Phase 4, 2020, maybe even 2030. Everything you’ll be talking about for the next decade has had its seeds sown in the Spider-Man: Far From Home post-credits scene.

And don't forget to watch our Spider-Man: Far From Home video review too below...

How many Spider-Man: Far From Home post-credits scenes are there?

We’ve all been there. You want to slink away after the credits have rolled to beat the traffic, but you’re not quite sure when the post-credits are officially done. Well, here’s your cheat sheet: There are two Spider-Man: Far From Home post-credits scenes.

The first comes right after the snazzy stop-motion credits sequence involving a roll-call of all of the main cast.

The second will play after the full credits – including music credits, Many Thanks credits, and so on – and then you can go home. Or you can sit in an empty cinema for a few hours. It’s up to you.

In a rarity for the MCU, the first of the Spider-Man: Far From Home post-credits scenes picks up right where the movie leaves off. MJ (who now knows Peter Parker is Spider-Man) is swinging through the Big Apple and clinging on to Spidey. She’s having­ a rough time of it and eventually gets put down by Pete near Times Square. It’s at this moment that a news report starts playing.

In it, an altered video clip from Quentin Beck of Mysterio and Spider-Man’s final showdown in London starts playing. Beck uses Spider-Man telling Tony Stark’s security system EDITH to “execute” his instructions and pits it against him. Instead of the webhead being shown as the hero, sending the Mysterio-controlled drones away before disaster struck, he’s seen as a cold-blooded killer. In one fell swoop, Mysterio makes Spider-Man seem responsible for the London attack, framing him for that, as well as his death. There’s also the added caveat of it now looking like Spider-Man has an army of drones at his disposal.

Of course, by Far From Home’s end, we are well aware Quentin Beck is a lying trickster with one too many pieces of illusion tech up his sleeve, but the man on the street doesn’t know that. It works too; Spider-Man looks on aghast as public opinion around him begins to sour.

Then things get good. Really, really good. JK f’ing Simmons returns as J. Jonah Jameson. Instead of being the Daily Bugle editor, he now appears to be some sort of shock jock, minus the cigar and with a little less hair on the top of his head. Jameson is appearing on the news channel to spout off about the public menace that is Spider-Man. New universe, same old JJJ.

In one final twist, Mysterio reveals Spider-Man’s true identity to the world: Peter Parker. There’s even a handy photo of him plastered all over the news. A kid from Queen’s who was bitten by a radioactive spider is now public enemy number one. We even get what’s fast becoming a Spider-Man tradition as the movie ends before poor Pete gets to say “What the shit?!”

What does that mean for Spider-Man?

Holy shit. This changes EVERYTHING.

Where to begin? For one thing, everyone who knows Spider-Man’s secret – that would be Happy, Aunt May, MJ, and Ned – are now in the firing line for any supervillain that might want to hurt the webhead. But there’s also the small matter of Spider-Man being framed as a villain in the MCU going forward. A potential Spidey threequel could, theoretically, deal with him being chased down by the authorities a la The Dark Knight, while still having a megalomaniac hunting him separately.

Also, who knows how the Avengers might react to the news of one of their own turning bad? Don’t be surprised if they get involved down the line too.

Oh, yeah. And JK Simmons is back as JJJ. I wouldn’t bet against him leading the charge against a certain webbed thorn in his side for years to come.

TL;DR? Spider-Man is in big, big trouble from now on. Everyone knows who he is – and that’s dangerous for the people he cares about the most.

The second of the Spider-Man: Far From Home post-credits scenes involves Nick Fury driving. Maria Hill is also there, chilling in the passenger seat after a job well done. It’s a scene not too dissimilar to the Avengers: Infinity War post-credits scene and, wouldn’t you just know it, Hill’s face begins to fade away again.

But, don’t worry, we’re not looking at The Snap Part 3. She’s secretly been a Skrull for the entirety of Far From Home – and so has Nick Fury! To tie it into the MCU-at-large, they’re actually revealed to be Talos (played by Ben Mendelsohn) and his wife from Captain Marvel.

Talos rings up the real Fury and explains that everything went according to plan and that Peter is now in control of EDITH. The scene then cuts to Fury sunning himself on a beach, sipping juice from a coconut.

Of course, with Fury being the man of mystery that he so proudly wears as a badge of honour, he isn’t actually on a beach at all. The illusion of the golden sands and lapping waves disappears and it’s revealed that the ex-Director of S.H.I.E.L.D is on his own secret mission somewhere in the outer reaches of space. There are some Skrulls around him, and Fury ends the scene by telling them to find his shoes.

How does that affect the MCU?

The Skrulls are back in play, baby. While it’s only been months since the release of Captain Marvel, it’s been roughly two decades since the shape-shifters have shown up in the MCU.

Why are they back? If Nick Fury is off-world, and the Skrulls have taken his place, that must mean there’s some serious intergalactic goings-on that need attending to. A set-up for Captain Marvel 2 seems the most likely outcome of this Spider-Man: Far From Home post-credits scene.

It’s also worth noting that Talos-Fury makes a pointed reference to “Kree sleeper cells” earlier on in the film. Could this be hinting at a reverse Secret Invasion, with the Kree taking over Earth?

That, of course, is still up in the air – but the presence of the Skrulls means it’s hard for us to trust anyone anymore. Which is probably what Marvel wants us to think as we hurtle towards Phase 4.