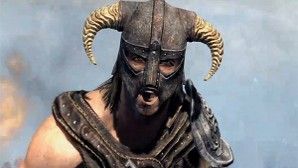 This image essentially sums up all that we know about Skyrim expansion Dawnguard. Soak it in. It's all you're getting until E3 rolls around next month. Well, that's not exactly true. We do know a few things, but none of them have been confirmed by Bethesda.

Last week, a user took a special peek into the latest patch's source code and found a few hints about what the next DLC pack might include. In a file marked "DLC01" he found references to "snow elves" as well as a "Snow Elf Prince" and crossbows.

It's been interesting to watch how Bethesda has handled this DLC announcement. They're doling out the tidbits piecemeal, and are plotting a major reveal at E3 2012. All of which suggests to us that this is going to be a pretty giant DLC pack in line with the Shivering Isles expansion for Oblivion.

With huge sales for Skyrim and 8 months to work on this DLC, we're expecting big things from Bethesda.