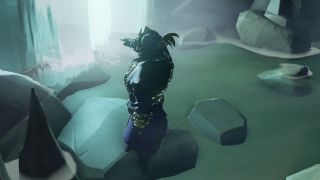 It's a long journey to be the best in Sea of Thieves. To become a pirate legend means hitting level 50 with each of the three factions in the game, as well as solving a  final riddle to earn you rewards. If you want the exclusive clothes, ship decorations and access to the pirate legend hideout we've everything here to help you on your way.

How do you become a Pirate Legend?

Easy! Just reach level 50 with all the in-game factions then solve a few more riddles Wait, sorry, that's not easy - that's super hard, or at least very time consuming. There are no tricks to it, just a whole lot of leg work. Fortunately, we have some more guides to get you started building up your rep with the factions.

Once you reach 50 with every faction and purchase all your promotion, you can talk to the Mysterious Stranger for the final step toward becoming a pirate legend. Spoiler warning in case you'd rather figure the last part out yourself. The Stranger will give you access to a special new sea shanty and one final riddle: "Take this tune and make a sound, the secret lies near in the ground." Do what the Stranger says and play your new shanty in the tavern, and you'll notice a glowing insignia appear on some of the cobblestones nearby. Then they'll drop down and reveal a hidden entrance to the pirate hideaway!

What are the rewards for being a Pirate Legend?

Aside from the inherent bragging rights of being a legendary pirate, you'll get quite a few exclusive rewards for your troubles. They start with gaining admission to an exclusive Pirate Legend hideout located somewhere in the Sea of Thieves (you can take your non-legendary crewmates in with you if you want). Inside you can collect extra-lucrative Pirate Legend Voyages and purchase customization options to kit out both yourself and your ship. See the full set of Pirate Legend clothes above.

Later on, Rare plans to allow Pirate Legends become Legendary Captains with their own special vessels - they'll spawn in at the hideout and then sail their ship right out from a hidden cave under a waterfall, Goonies-style! You'll have to put even more work in to get to that point, though.

Who is the Mysterious Stranger?

They wouldn't be very mysterious if we knew the answer to that question, would they? All you need to know is that there are many of them, and that they're key in your quest to becoming a Pirate Legend. Don't expect them to be of much help before you reach that everybody-at-50 prerequisite - they'll just keep telling you to report back when you're a few levels higher.

Where is the Mysterious Stranger?

You'll find a Mysterious Stranger lurking at the back of every tavern in every outpost in the Sea of Thieves (you appear at a tavern whenever you log in). They're the ones with the glowing eyes, you really can't miss them. Every Mysterious Stranger serves the same purpose - think of them as particularly cryptic faction reps - so don't worry about which one you talk to.