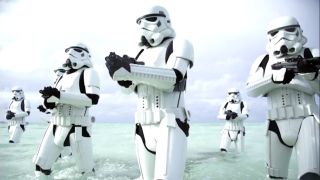 Reshoots on Star Wars: Rogue One became a hot topic earlier this summer, when rumors circulated that Disney execs were unhappy with test screening responses. Director Gareth Edwards fired back that the whole thing had been "blown out of proportion," then Mission: Impossible director Christopher McQuarrie later chimed in to shoot down other rumors that he was apparently taking over those reshoots. It's been a rollercoaster trying to keep up with everything yet according to THR, it's not over.

While McQuarrie wasn't involved in those reshoots, The Bourne Legacy director Tony Gilroy was on hand to give notes and polish the reworked script. He was apparently "the driving force" behind the five-week reshoots. It's since come to light that he's also chief of the edit suite, as the outlet says Gilroy is "supervising the edit with Edwards."

Now, that sounds like the studio asked Gilroy to come aboard because it was dissatisfied with an early cut from Edwards. Perhaps that's the case. It's not at all uncommon for the behind-the-scenes crew on a major tentpole movie to be in flux. This is Star Wars. It's a big deal.

However as the report states, Edwards and Gilroy previously collaborated on the edit for 2014's Godzilla. It could simply be that they work really well together, and Gilroy's extensive experience helps to shape Edwards' vision. "There are not two separate editing rooms; they are all in there with their ideas," one of THR's sources says. "Tony's a strong force, but they're all working together."

Let's not forget that Disney has yet to confirm anyone else's involvement bar Edwards, so this is still speculative. Fingers crossed that whoever's piecing together the final cut will deliver a stonkin' good flick on par with The Force Awakens.