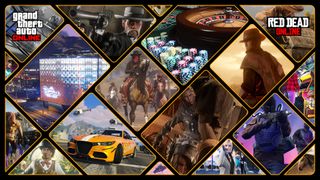 In a rather lengthy website post, Rockstar announced that GTA Online's player base is at an all-time high in its seventh year since release. Without mentioning specific numbers, Rockstar said the release of The Diamond Casino & Resort preceded record-breaking "daily, weekly and monthly average players" in July and August. Reportedly, The Diamond Casino Heist carried those numbers through the holiday break, "bringing players back in bigger numbers than ever before over the holiday period."

Red Dead Online also saw record numbers in December after the Moonshiners update, and another peak in January.

Now onto the good (free) stuff. GTA Online is giving out $1 million GTA dollars to players who log in between January 30 and February 5, and another $1 million for logging in between February 6 and February 12. It's as simple as that, log in twice in those time periods and walk away with a cool $2 million to fuel your drug empire.

On the Red Dead Online side, log in between January 28 and February 3 for a free Schofield Revolver, a free Varmint Rifle, and the Devastating Ammo Bundle. Jump in the following day or any time before February 10 for your free Bounty Hunter license, 25x Bolas, and 25x Tracking Arrows.