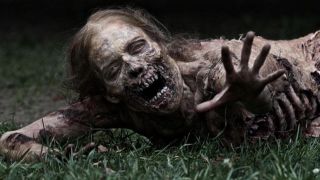 The exchange began with host Chris Hardwick asking the burning question: will these two series ever cross over? "Never," Kirkman jokingly responded, then explained that he and the rest of the folks behind the shows have been very careful to make sure each show has its own identity despite taking place in the same world: "I think that we've finally gotten to a place with Fear The Walking Dead that it has its own identity, where we can play with some things." Then he finally answered the question.

Well, he knows, obviously. But Kirkman's keeping the details deep under wraps for now. Don't worry, it sounds like it won't just be one of the same Walkers from Fear The Walking Dead showing up in The Walking Dead (hey, you can cover a pretty good distance in a few years if you never stop shambling).

"This is a huge event in the world of Walking Dead, we're very excited about this, and there's going to be some more news on this front in the coming months. So please stay tuned to what they call the internet, or the papers, and you will find out more about this stuff. But it's going to be huge. We're all very excited."

Don't miss our collection of New York Comic Con 2017 trailers, and check out the rest of our NYCC 2017 coverage for more news from the show.