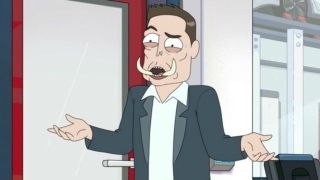 Rick and Morty season 4, episode 3 had everything: heists, Mr. Poopybutthole and, uhh, a cameo from Elon Musk, who happened to be the Elon Tusk voice actor. Obviously.

While the new Rick and Morty post-credits scene didn’t include the Telsa CEO (or his tusk-based equivalent), it did give us an epilogue for Mr. Poopybutthole’s post-teaching career – plus a little window into the mind of Morty after his Netflix dream was left in tatters. Here’s everything you need to take away from the “One Crew Over the Crewcoo’s Morty” post-credits scene, as well as some background on the Rick and Morty Elon Musk cameo.

Rick and Morty Elon Musk cameo: who is the Elon Tusk voice actor?

Yup, that was actually Elon Musk voicing Elon Tusk, an alternate universe version of Elon Musk who is no different to our own, except he has tusks. Elon Tusk is brought in to help with Rick’s heist time in, what we later find out, was an act of sheer randomness. We think. We’re still trying to wrap our heads around Heistron and Randomtron’s switcheroo. He even gets top billing in the credits and has to read out some semi-crushing lines about how our Earth’s Elon Musk doesn’t play nicely with others. Ouch.

Earlier this year, Elon Musk changed his Twitter profile name to “Elon Tusk.” Little did we know it was hinting at the entrepreneur’s guest appearance on Rick and Morty season 4. He also joins a legion of guest stars this year, including Jeffrey Wright, Taika Waititi, Sam Neill, and Kathleen Turner.

The after-episode stinger sees Rick, Morty, and Mr. Poopybutthole all sitting on the roof of the Smith family house as a storm approaches. Rick and Mr. Poopybutthole are downing a cold beer, while Morty is fiddling with a Rubik’s Cube and generally looking uninterested after becoming disillusioned with his heist movie script. Poor guy.

Mr. Poopybutthole asks how Rick and Morty enlisted him to the team, despite not being sure if he was any good at karate. Hilariously, Rick reveals that he asked Mr. Poopybutthole’s grad students to attack – and they didn’t take much convincing.

So, does this clue us in to what happens next time? Not really. The post-credits scenes should all be taken as non-canon, with Morty’s premiere post-credits meltdown not carrying over into the next week, nor did Jerry’s dream sequence in the second episode’s post-credits scene. Even Rick’s lonely ending last week in the episode itself didn’t get a mention – the serial week-to-week storytelling in Rick and Morty is only brought up when Justin Roiland and Dan Harmon feel like it, if it all.