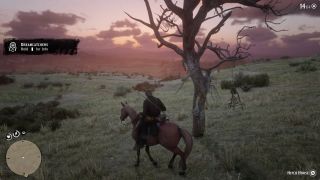 As one of the collectibles you'll most likely discover by accident as you ride around the plains, you'll find Red Dead Redemption 2 dreamcatchers hanging from trees. They're not the easiest things to spot, but thankfully there's only 20 of them in total to find so the task is not too arduous. It's worth spending the time to track them down in Red Dead Redemption 2 though, as that unlocks an Ancient Arrowhead treasure which will double Arthur's stamina while using a bow. A pretty good return on your time spent searching. So, regardless of whether you're just getting started, or can't find the last few, our Red Dead Redemption 2 dreamcatchers guide has got you covered with all the locations, maps, and details needed to locate them all and get that Ancient Arrowhead.

We’re going to start in the North West corner of the Red Dead Redemption 2 map and work counterclockwise to catch every single dreamcatcher, starting with this one, east of Cottora Springs, just a few clicks north of the railroad in a small forest at the top of the ridge, to the right of the fork in the trail.

South West of Window Rock, just off the beaten path to the left if you’re facing North. There’ll be a fallen tree on the side of the trail, and beyond this lies the dreamcatcher, slightly up the hill.

This one is situated almost halfway between Cattail Pond and the “T” of Grizzlies West. Climb up high towards the peak of the mountain range and, at a clearing where the pictured marker is, you’ll find the second dreamcatcher on a leafless tree.

Follow the trail leading south from the “E” in Valentine, and look to your right just before it reconnects with the main path. There’ll be a large, black tree beyond a stump with the dreamcatcher dangling from it.

Just southwest of Caliban’s Seat is an intersection in the main road. Following it slightly west and looking to your right just before the nearest mountain range, you’ll spot a collection of trees, one of which has the dreamcatcher you’re looking for.

Journey to Flatneck Station and head West along the northern path. At the junction there’ll be a hill on your right, overlooking the river. The tree with the dreamcatcher will be at its peak.

North of Citadel Rock lies two trees, found between the nearest path and train tracks (but closest to the path). This is where dreamcatcher number 7 can be found.

Literally a few yards left of the first “E” in New Hanover, just west of where the train tracks intersects with the path, you can find a clump of trees, where a dreamcatcher hangs from one in the middle.

Set your waypoint on the top right hand corner of the “N” in The Heartlands. There’ll be a sole, miserable looking tree right at its marker, upon which is found the ninth dreamcatcher.

North East of Guthrie Farm near Emerald Ranch, before you hit the lakes of Heartland Overflow, there’ll be a lone tree north of the trail, where dreamcatcher number 10 lies.

Put a marker on the right side of the “O” in New Hanover. This multi-branched tree will be towards the top of the hill, within a small forest.

Go West of the cursive “P” in Aberdeen’s Pig Farm (just below Emerald Station), the dreamcatcher can be found on the only tree in the open field, beyond the intersection beneath the train tracks.

North West of the cursive “L” in Lonnie’s Shack (West of Bluewater Marsh), venture in that direction beyond the track and you’ll find a dead tree with your 13th dreamcatcher attached to it.

A few clicks above the “B” of Bluewater Marsh, in between the diverging roads just West of the intersection, this dreamcatcher decorated tree can be found in the middle.

Dead South of the Elysian Pool, to the right of the top part of the second “E” in New Hanover, head uphill, and just past a large boulder you’ll find the tree you’re looking for.

Follow the path going south from the “ES” in Annesburg, and about halfway down there’ll be a large rock on the left side. That’s your cue to head into the forest beyond and find the hard to miss dreamcatcher within.

South between the “U” and “R” of Annesburg, just below where the path takes a turn, there’ll be a dead tree up the hill, complete with dreamcatcher.

Just northeast of the top right part of the “N” in Annesburg, this tree can be found at the intersection of the main path, on its south side.

To the west of the second “O” in Roanoke Valley and north of the “S” in Annesburg, you’ll find the tree where these two lines meet, in a sparsely forested zone just outside the intersection.

Head to The Loft, which itself is located in the Grizzlies East. To the southeast of that building, heading slightly downhill, you’ll chance upon your very last dreamcatcher.

With all 20 Red Dead Redemption 2 dreamcatchers discovered, now comes the final part of the process. A large “X” will show up on your map, in the Elysian Pool at New Hanover. This will lead Arthur to a cave behind a waterfall, and you’ll need to follow the path on your right.

Start climbing until you reach a mysterious looking cave painting scribbled across the wall (use a lantern if you’re having trouble seeing anything). Find the “eye of the bull” on that painting until the interact button appears. This will allow Arthur to uncover the Ancient Arrowhead treasure, thus completing the dreamcatcher questline. Congrats!