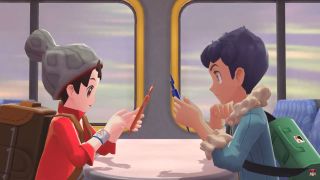 Before you dive headfirst into the British-inspired world of Galar to discover all it has to offer, why not prepare yourself with our handy Pokemon Sword and Shield tips? After all this is a brand new Pokemon game that aims to change things up a bit - although not too much for old-school Pokemon fans - so you might need a helping hand or two. So, without further ado, here's our top Pokemon Sword and Shield tips to take with you on your Gym Challenge journey.

1. Catch everything new you see in the Wild Area

The Wild Area is the shining star of Pokemon Sword and Shield, offering budding trainers a wealth of Pokemon to catch and discover. But the Pokemon that appear in each of the regions of the Wild Area will depend on the weather conditions that are currently happening there. So if you see something you want to add to your Pokedex wandering/fluttering/swimming there, you should catch it while you can. After all the weather might change and mean that it's not going to appear there again for a little while.

2. If in the Wild Area a Pokemon is called "strong-looking" you won't be able to catch it yet

However, that comes with a caveat. Pokemon Sword and Shield puts a level cap on the wild Pokemon you're able to catch. This rises with each Gym Challenge completed - basically going up five or 10 levels with every Gym Leader you beat - but initially, it'll limit what Pokemon you are able to catch in the Wild Area. But instead of you having to check your Trainer Card or remember what you're current catch level cap is, any Pokemon you approach in the Wild Area that's described as "strong-looking" is way above that. You'll be able to battle them for some serious XP, although it'll be a struggle, but you won't be able to catch them - or even attempt to.

3. Don't get greedy for berries

Berries are an important part of Pokemon Sword and Shield. Not only can they be held by your Pokemon and consumed during battles, but they make up the base of the Pokemon Camp-created curries that will heal your Pokemon en masse, and boost their morale. You'll find berries by shaking trees, but beware. If you played Pokemon Sword and Shield on the 3DS you'll know about this potential risk, but for those of you who skipped Alola, you'll need to be careful because amongst the berries you'll regularly find a wild Pokemon. Shake the tree too much and said critter will fall from the tree, triggering a Pokemon battle that'll give other wild foes to swoop in and steal the berries shaken loose from the tree lying on the ground. You'll get a few if you run from the battle or defeat the tree-dweller but the great majority will have already been gobbled up.

There's a new feature for Pokemon Sword and Shield called the Player Card. It's basically a Pokemon Card but for your in-game character, which you can create, customise, trade and share both with character in the story, but also real-world players in the Wild Area. Create via the terminals in PokeCentres, on the front is a cute little avatar of your character, but on the back is a record of your in-game achievements: your starter choice, when you first started playing, the number of currys you've made, best rally point score, the number of Pokemon you've caught, and how many shiny Pokemon you've found. But, it won't update with your latest data unless you manually go back to the Pokemon Centre and refresh it via the terminal. You don't want to give your fellow trainers out of date info now, do you?

5. Don't forget to cook at your camp regularly

Although you might question some of the Pokemon Sword and Shield Currydex recipes, especially the ones that involve whipped cream, they are essential for caring for your Pokemon in between PokeCentre visits. Creating a great curry at the Camp will revive your Pokemon, refill their HP and make them friendlier towards you, which will regularly get you battle perks like your Pokemon withstanding an otherwise KO-worthy attack with a single HP just to stop you getting sad. Just watch that you don't burn your curry while fanning the flames, and try not to spill too much as you stir. That way you're more likely to cook a better quality curry that'll be more beneficial to your Pokemon.

6. Investigate every glowing Pokemon Dens in the Wild Area

There are a couple of new currencies in Pokemon Sword and Shield, but the one you'll use most - aside from the regular cash - are Watts (W). This is the new currency for the Wild Area. You can use Watts to buy upgrades for your Rotom Bike, Wishing Pieces to throw into Pokemon Dens, and unique TMs. You can earn Watts by catching Pokemon and setting fresh Rotom Rally races - basically timed bike rides across the Wild Area - but the easiest way is just checking in with every glowing, rocky Pokemon Den you come across as you explore the Wild Area. Dens with energy only 'trickling out' will still net you 200W, while those emitting a beam of energy signalling a Max Raid battle is available will automatically gift you 2000W. That's a lot of curry ingredients.

7. Talk to everyone you can

If you're a long-term Pokemon fan, this will go without saying, but I'll say it just in case. Talk to everyone you meet in Galar, particularly in the Wild Area. NPCs regularly have items to gift you, Pokemon or things to trade, or just a fun fact that'll come in handy on your Gym Challenge journey. Get chatting.

8. Don't forget to check in with the Camp Expert

One particular NPC to check in with regularly is the Camping King. He's not exactly well-signposted, but you'll find him located just to the right of the steps leading from the Wild Area to Motostoke dressed in yellow hiking gear. He'll not only be able to change the colour of your tent to a theme associated with the first Pokemon in your party, but he'll also rate your currydex. He'll give you a treat for every batch of five recipes you've discovered, including more toys for your Pokemon that have different effects on their mood.

9. The Options Menu has some great hidden features

If you're anything like me, as soon as you've got a solid party of Pokemon to take with you along the story, catching any other Pokemon can often just be a case of filling out your Pokedex. Because of that, there are some handy toggles in the Options Menu that'll streamline the menus you have to thumb through after each catch. There are toggles to turn off the 'give nickname' option, and opt to automatically send Pokemon to a Box when your party is full. And because you've got access to all your Pokemon Boxes straight from the Pokemon section of the menu, you can afford to cut down your post-catch button clicks.

10. The market in Stow-on-Side is very lucrative

Money is a surprisingly scarce resource in Pokemon Sword and Shield, but as tempting as it might be to flog the rare items you find along your travels to the local PokeMart vendor, there's a better place to sling them. Head over to the market in Stow-on-Side, and there's a chap on the left who will buy one special item a day for serious cash. He'll buy things like Big Mushrooms, Rare Bones and more. For example, he'll buy a Star Piece for $14,000, whereas a PokeMart will only give you $6,000 - less than half what the market stall fellow will give you. The only caveat is that he'll only buy one thing from you per day, so making cash that way takes a little longer. It's just a lot more lucrative per item.

11. Your Pokedex will give you suggestions of what to catch next

One of my favourite new features is the Pokedex tweak that will give you little recommendations as to what Pokemon you should catch next. Just head into the Pokedex section of your X menu, and you'll see the 'Current Recommendations' section right there on the home screen. They're not only relevant to your current location, but will also change according to the weather conditions happening at that very moment in the Wild Area. It's a great way to get a little encouragement to tick off another 'dex entry.

12. You can only change your clothes in a boutique changing room

It seems odd to put such an emphasis on being able to change your clothing, hairstyle and other customisation options in Pokemon Sword and Shield, but limit when and where you can switch out your style. You can only tweak your look in the changing room at any boutique, and your hair and makeup at a salon. It's a little frustrating not to have an option just there in the menu.

13. And never your uniform

That's an even bigger frustration when it comes to your uniform. With every Gym Challenge you beat, you'll earn that Gym's uniform. But, instead of being able to switch it out for the official striped number you get given at the beginning of the game, it can only be used as your main everyday outfit. Disappointing right?

There are four reward Pokemon that you can unlock for free (sort of), if you know how to get them.

First, there's the special Gigantamax Eevee and Gigantamax Pikachu, which you can unlock if you have save data for Pokemon Let's Go Eevee and Pikachu respectively on your Switch. If you tick that box, head over to the Wild Area train station and speak to the boy and girl standing in the corner there. The girl will give you Pikachu if you played Let's Go Pikachu, and the boy will have Eevee for Let's Go Eevee players.

Then there's Long Meowth - aka the normal Kanto form Meowth, who just happens to get very long when in Dynamax form. Anyone who buys Pokemon Sword and Shield will be able to redeem it between launch day on November 15, and January 15, 2020. Go to the Mystery Gift portion of the menu, then hit 'Get a Mystery Gift', then 'Get via Internet', and you'll be able to get your Meowth.

Finally, you can also get a Mew. But, there's a catch. You'll need to buy a Poke Ball Plus, as there's one hidden inside. If you buy one, to redeem your Mew you can go again to Mystery Gift and opt for 'Take a Stroll with Poke Ball Plus'. Once you have synced the ball to your game, you'll receive Mew. However, a small but important note, if you've already redeemed your Mew in Pokemon Let's Go, you won't be able to get another one. You will be able to trade yourself Mew from Let's Go to Sword and Shield when Pokemon Home launches in 2020.