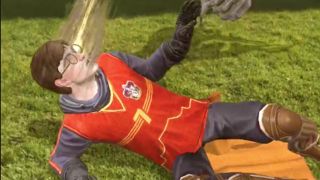 You've probably spent years mourning the fact that you never got your Hogwarts letter. I know, I know, I did too. One of the things we muggles could do to make ourselves feel better is decide what Hogwarts House we belonged in, whether that was Hufflepuff, Gryffindor, Slytherin, or obviously the best one, Ravenclaw (fight me). But despite Hogwarts Houses being a huge part of how Harry Potter fans identify themselves, your Hogwarts House has almost no impact on how you'll play Harry Potter: Wizards Unite, the Pokemon Go-esque game from Niantic and Warner Bros Entertainment.

The only effect picking your hallowed House has is cosmetic. Anyone hoping for a stat boost to brewing potions for Hufflepuffs, casting spells for Ravenclaws, defending yourself for Gryffindors, or getting extra coins as a reward for completing assignments for Slytherins is going to be disappointed.

I spoke to Mary Casey, executive director of product for Warner Brothers Entertainment, about the Hogwarts Houses and she told me that "it was really important for us to make sure players could all play together … all of those people come from different houses, and it was not an expectation that we'd ask for people to change house as it's such an intrinsic part of you and your personality. So currently Houses are really geared around mainly cosmetic changes etc, and we're really leaning into your uniqueness and your specialness in your professions. And that really allows everyone to come together and play together and be cooperative."

Professions are the three classes you can choose between in Wizards Unite (Auror, Magizoologist, or Professor), which have their own skill trees. Now that we know the Harry Potter: Wizards Unite release date is June 21, you won't have to wait long to pick your Hogwarts House for yourself.  So if you're looking to celebrate your House pride in Wizards Unite you're going to have to stick to picking scarves that have your house colors, or just proudly yell at anyone you see playing the game that you're a Ravenclaw. Even though that sounds like a thing only Gryffindors would do.

If you want to know more about Harry Potter: Wizards Unite, here's why it's more RPG-centric than Pokemon Go, or look below to see what's going on this week in the world of movies, TV, and games!