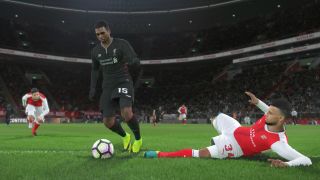 Konami has revealed details of its eSports-focused PES League for PES 2017, with a cash prize of a whopping $200,000 for the overall winner.

Within the PES League structure, there will be two online seasons – the first of which kicks off today (15 December). The first two phases off each season take place purely online, with 16 successful qualifiers going to a regional final: for European players, the first of these is in Barcelona in February. Make it through the regional finals, and you'll be headed to the national finals in Cardiff on Champions League weekend of 2 and 3 June.

While only one winner can claim the big $200K bonanza, the consolation prizes are fairly tidy too. Second place scores $100K, third place $50K, and regional winners $20K, with runners-up also promised some hard-earned dollars for their efforts.

The competition is exclusive to PS4 and PS3, and to enter you first need to sign up at pesleague.com. From there, all your results in-game under the PES League banner will be tracked, with the best 16 in your region invited to the national final in mid-Jan.

“I saw for myself at Gamescom how high the level of skill is within the PES community,” says Dortmund forward and PES ambassador Pierre-Emerick Aubameyang. “The guys who'll vie for a place in Cardiff are at another level. The Official PES League is the best way to prove just how good you are at PES 2017, and I look forward to seeing the world’s best players showing their skills.”