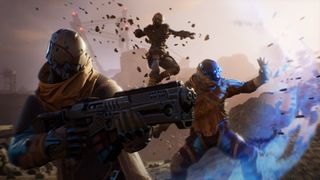 Outriders is one of the titles set to usher in the next generation of gaming, so it's exciting to see it drop six minutes of raw gameplay footage this soon. Since the RPG shooter will drop for current-gen consoles as well as PS5 and Xbox Series X, the hype is real and it's palpable - even more so now that the release date has been pushed from this summer to Holiday 2020 (likely to coincide with the next-gen debuts).

The video, which features creative director Bartek Kmita and lead writer Joshua Rubin, shows off three of the four classes you can choose from when playing Outriders (the fourth is TBA, so stay tuned). The three known classes are Pyromancer, Trickster, and Devastator, and the game is designed to balance these classes' abilities with the hundreds of weapons you'll find and upgrade throughout the game.

You can see from the footage that the Trickster manipulates time and space with skills like the Slow Trap, which slows down enemies and projectiles within a circular radius. The Devastator is a tank class, and heals by being close to enemies and doing damage. The Devastator's Earthquake skill is "like a better shotgun" according to Kmita, but the most impressive is the Gollum, which temporarily buffs the Devastator's armor so they're virtually indestructible.

The Pyromancer isn't featured until later, but it was the class I played during my hands-on preview of Outriders. Playing as the Pyromancer means playing as a mid-range brawler that can turn enemies to ash or conjure a massive wall of fire that surges forth from the player. It's hot. As mentioned in our hands-on, you do not need to bring one of each class into the fight, so parties can use any mixture of classes.

As you can tell from the footage, Outriders plays like a Mass Effect/Gears of War/Bulletstorm hybrid, but looks a helluva lot like Destiny. It's fast-paced but features a lot of cover options, and the balance between skills and weapons feels like the best moments of Mass Effect 3.

The video also details Outriders' loot system, which allows you to destroy items to gain scrap (or money), or buy items from vendors who will be located throughout the world. Check out the rest of the video to get some more details about the plot and what went wrong on Enoch, the planet that was supposed to be humanity's home after Earth fell.

If a good, hard look at Outriders gameplay footage got you excited, you should check out the best upcoming games of 2020.