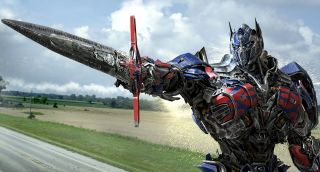 Paramount is set to clean up the box office once again next summer with Transformers: The Last Knight, which is currently knee-deep in production. We've heard bits and pieces about the film from director Michael Bay on social media, but a new billboard spotted in Times Square (via Seibertron and ComingSoon) showing Optimus Prime in battle with a three-headed foe may give us our best hint yet at what's in store for the fifth film in the Transformers franchise.

While it's still difficult to put a finger on exactly who the Autobot leader is facing off against, the billboard also reveals a battered Decepticon flag. We know Megatron will be back for Transformers 5, so it's safe to assume he's either in league with or in command of Optimus' new adversary.

Speaking of Optimus, I'm a big fan of the character but the way in which he's been used in the Transformers movies has gotten progressively worse (if you really want an example of Optimus done right, check out the excellent animated series Transformers Prime). Here's hoping that they do a bit of course correction on that front when he returns to cinemas next summer.