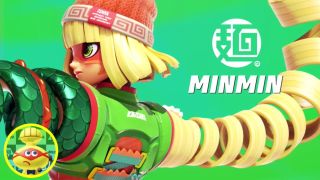 The only fighting game based on spring-loaded arms (that I know of), Arms will launch on June 16, Nintendo has revealed. Along with the summer release date, Nintendo gave a preview of a newly-announced character, Minmin.

Like the rest of the Arms cast, Minmin is quite the interesting... erm, human? Question mark? Her arms (and hair, it seems) is made out of ramen. Ramen that transforms into a dragon that shoots lasers. In case it wasn't clear, this is a very silly game.