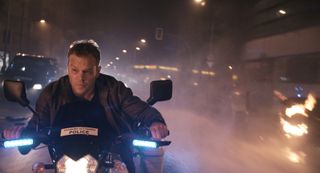 A recent TV spot for Jason Bourne seemed to reveal a big spoiler regarding the fate of one of the series' more significant characters, but it seems like the Universal marketing department isn't quite done revealing more big surprises from the movie.

A new preview for the film has emerged online, and you can check it out below...

This clip seems to position Tommy Lee Jones' CIA director as a villain of sorts who had Bourne's father killed, a tragedy which looks to be the reason he volunteered to go through the agent program in the first place. It's an intriguing bit of information for sure, but once again it feels more than a little ill-advised to reveal such a gut punch in a TV spot when the film is still over a month away from release. Indeed, the fact we still have a while to wait before the movie arrives in cinemas makes me a little worried that more spoilers are on the horizon in the coming weeks.

Once you take its revealing nature out of the equation the clip itself is suitably intense, teasing a Bourne who goes on the hunt for the truth and then revenge. If these annoying previews continue though, it may be time to send him after the Universal marketing department.