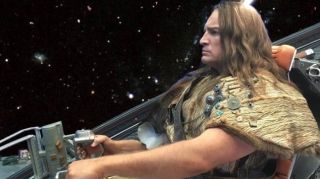 Guardians of the Galaxy 2 director James Gunn tweeted our Entertainment Editor, Lauren O'Callaghan, clarifying that Nathan Fillon was never going to appear in the movie (*sob*) but took this photo during a set visit.

For the record, that was never a scene in the movie - that’s simply @NathanFillion clowning around on set. https://t.co/o3oRI3O3xwApril 21, 2017

C'mon Nathan Fillion, you should know better than to joke around about filming Guardians 2 scenes and getting our hopes up like that.

Guardians of the Galaxy 2 may already have its fair share of iconic actors - including Kurt Russell as Star-Lord's pops and Sylvester Stallone in a cameo role – but fans of Firefly would have had Nathan Fillion as numero uno on their cameo wishlist. And they nearly had their dreams come true, but the scene was cut. Thankfully, Nathan Fillion salvaged a space-faring shot from the deleted scene.

Taking to Instagram, Fillion showcased the shot of his unnamed character piloting a ship and decked out in a costume that makes him look like Conan the Barbarian in space. It’s not quite Firefly but, hey, it’s something.

From a scene you won't see in Guardians of the Galaxy Vol 2. Is the movie still spectacular without it? Yes.

What with the movie coming with five (count ‘em five) post-credit scenes, it’s a little disheartening that James Gunn couldn’t squeeze in a few frames of Fillion to tide Firefly fans over. That wound is still fresh, damnit.

I suppose we’ll have to make do with Snake Plissken and Rocky in outer space.