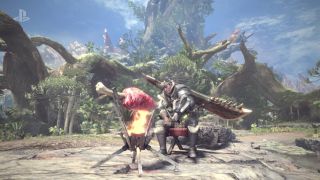 In a surprising turn early in Sony’s E3 2017 press conference, Sony unveiled a brand new, distinctly current-gen Monster Hunter for PS4, entitled Monster Hunter World. While the trailer doesn’t give too much away about the wider structure, or what exactly that ‘World’ part indicates – though a bit of camp fire cooking does appear at the end – it does indicate an interesting tune-up of the series' traditionally methodical action.

With a slightly more western twang, Monster Hunter World doesn’t waste any time in getting into some serious action, with a faster, more frenetic vibe than the series' traditionally more methodical MO. After a bit of light stalking and a dash of Assassin’s Creed-style, crouching-in-a-bush fun, our giant-sworded hero creeps up on a huge T-Rex type creature, but then climbs to a higher vantage point and leaps on top of it to initiate a distinctly cinematic struggle.

From there on, it’s smash cuts of similar battles, dotted with slightly scripted-looking stand-out struggles, and a whole lot of running away from large monsters whilee leaping and vaulting over logs. Imagine the bit in Uncharted 2 where you have to run away from the truck, except with a giant, hulking lizard, and you’re pretty much there.

That aside, there isn’t much to decipher, except that the game looks gorgeous, in a more-photorealistic-than-usual kind of way, and that it’s coming in 2018. More news as we get it.